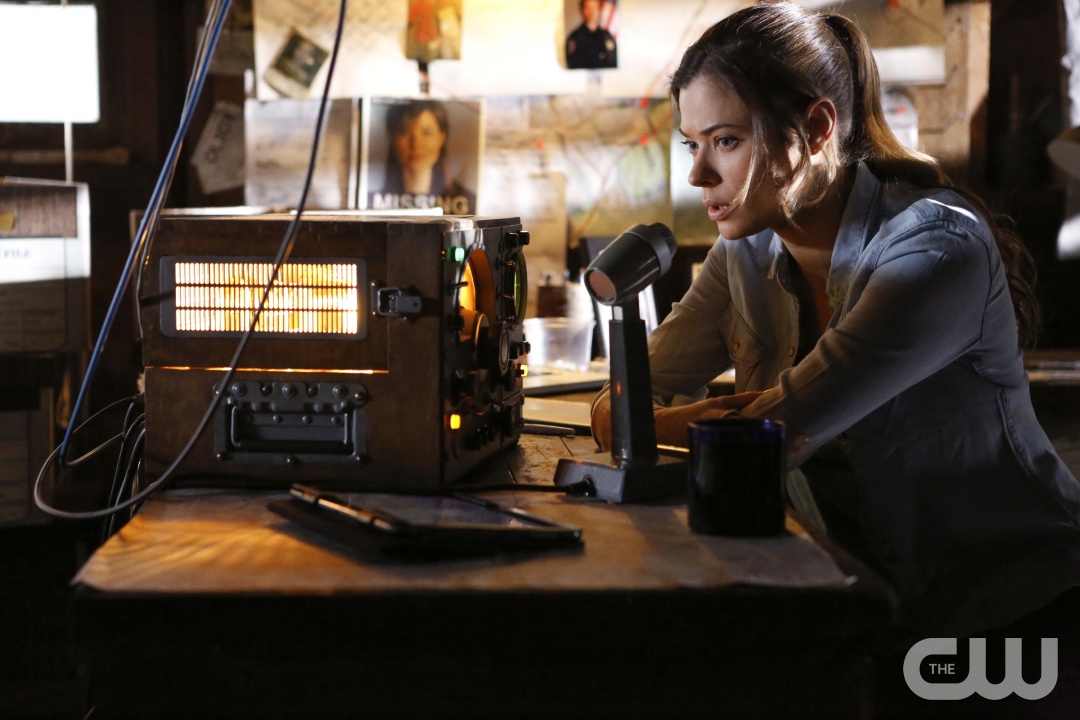 On Wednesday, Oct 5 at 9:00 pm The CW premiered a show called Frequency. Having just finished up the newest episode of Arrow I caught the first few minutes of this new show and it quickly captivated me. I ended up watching the entire episode.

The premise of Frequency is as follows: Raimy Sullivan (Peyton List) notices her supposedly broken radio has turned on. She goes to check out the situation, and strikes up a conversation with the person – who, by the way, could very well be a serial killer who finds his victims via radio. Luckily, he’s not a serial killer, but instead her long deceased father, Frank (Riley Smith), twenty years in the past. Just as they’re about to bond and make up for all of the mistakes of the past, Raimy realizes that the next day is the day her father dies. She warns him and miraculously prevents his murder (because messing with time has never been a bad idea*), only to have unsuspected consequences.

If this sounds familiar to you it’s either because you’ve watched the movie it’s based off of, where Raimy is actually a man named John, or you’ve watched the movie The Lake House. The Lake House has a similar plot where Kate (Sandra Bullock) discovers that the mailbox of the house she has just vacated connects to the same mailbox, but two years in the past. She quickly falls in love with Alex (Keanu Reeves, looking more attractive than usual), the person living in the house. After a while they decide to meet up, but Alex stands Kate up. Except not really, because he’s dead in her time, and, twists of all twists: it’s all her fault. Like Raimy, Kate breaks all rules of time travel and saves Alex.

If you’re looking to communicate through time, whether it be twenty years or two, the past or future, here is my official guide:

Find a nondescript object that just so happens to have a connection with the past. This can be a mailbox (like in The Lake House) or a radio (like in Frequency). It’s imperative it have some aspect of communication, so it can’t be something like a shoe or an empty soda can – those are things you can use as Portkeys, not something you use to communicate with someone in the present, let alone the past. Things you should check for time traveling abilities: a typewriter, a laptop, or a diary. I suggest you check any and all of these that you come across. Just in case.

Wait for an answer.

After contact go through any number of the stages of grief. It’ll usually be disbelief or denial, but occasionally anger can be thrown in if the person you’re communicating with is dead in your time.

Ask for proof. Anybody can claim that they’re from the past/future. Don’t be some fool that just believes the first person that claims to be from the future. They’ll either give you some details that anyone with the Internet and superior Googling skills could tell you or give you something with the date on it (which, again, can be acquired from the Internet… technology has truly ruined time travel for cynics).

You won’t want to believe them, until something bizarre with no other explanation happens. In The Lake House this event happens when a dog runs through paint, leaving paw prints where Kate said they already were. In Frequency this happens when Raimy accurately “predicts” the outcome of a baseball game that Frank watches the next day.

So, if in your situation you’re the person from the future, be sure to spew as many pop culture references that can be proven in the near future of the past (time travel is confusing) within the first few minutes of your conversation. And hurry, there’s no telling when the person on the other line will get frustrated and stop listening/reading.

Once you’ve both been thoroughly convinced of your unbelievable yet somehow recurrent circumstances you will start a correspondence with the past. Unless you’re already related to each other you’ll probably fall in love. This is inevitable. Just let it happen.

Just as soon as you both start to feel happy with your interdimensional pen pal – preferably following a montage of good times you had separately, yet together – you will realize that the person from the past is about to die. You (still assuming that you are the one in the future) being in love with/related to them will of course attempt to prevent the murder. There’ll be a few moments where you end up crying on the floor, thinking you didn’t succeed, but don’t fret. I assure you, you did. There should be a sign after a couple minutes, so just save your tears and wait.

Face the consequences of screwing up the timeline. This probably means that other people you know and love are: dead, unsure of who you are, or nonexistent. Maybe even you will be the one to pay with your life. So be sure that you’re willing to deal with time travel paradoxes before you go checking typewriters or diaries.

*Instances where messing with time was in fact a bad idea:

Back to the Future

Planet of the Apes

Harry Potter and the Cursed Child