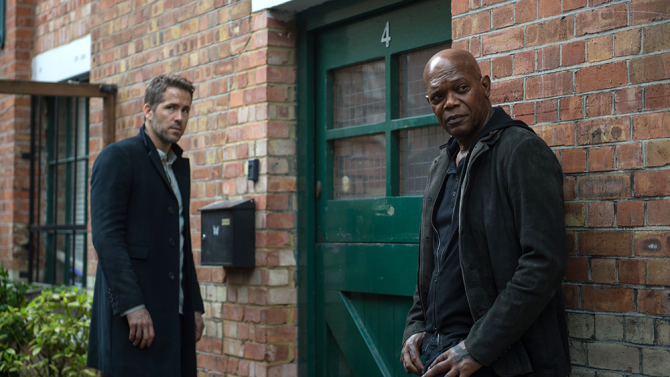 There are plenty of classic buddy cop  flicks and odd duo movies from the 80’s and 90’s. The Hitman’s Bodyguard takes a stab at that genre. The film is about a former triple-A rated bodyguard that has to help a veteran contract killer get to court without getting killed. Patrick Hughes directs a talented cast that includes Ryan Reynolds, Samuel L. Jackson, Gary Oldman, and Elodie Yung.

The script is simple, and really does rely on the chemistry of the two leads. Fortunately, Reynolds and Jackson work together fairly well. Even when some of the jokes feel forced or redundant, they manage to coast off their likability. There’s also a lot of solid action scenes with entertaining shootouts and hand-to-hand combat. Nothing special, but they didn’t gloss over the training.

Visually, the film seems a little off, as in it almost feels like straight-to-DVD quality. Although the action scenes are above average, there’s no real sense of creativity, as they are shot in a cookie-cutter manner. The film also feels a little too long, even with a fairly quick pace, which could be the result of not enough opportunities to connect to the leads. We do get backstories, but they just don’t make the audience care enough when bullets start flying.

Reynolds and Jackson put in the effort, but they can’t elevate the mediocre script and direction to something better. Ryan Reynolds plays Michael Bryce, the man with the plan, and Samuel L. Jackson plays  Darius Kincaid, an assassin that likes to wing it. Together, they fit the formula of the odd duo that’s been done to death. Reynolds, as usual, feels comfortable playing the sarcastic and snarky type and Jackson plays the cool, but deadly, hitman role well. Neither phone in a performance, but their characters just weren’t memorable enough.

Then there’s the villain. Yes, Gary Oldman is in this film as the antagonist, Vladislav Dukhovich, but he isn’t given much to do. He barely interacts with the two leads and every time the film cuts back to what he’s doing, it feels like a different movie. This role is truly such a waste for Oldman’s acting talent. Salma Hayek, who plays Kincaid’s wife, is probably having the most fun out of everyone with her role. Elodie Yung also does an admirable job playing Bryce’s ex-girlfriend Amelia, but she’s also trapped in a shallow role.

Overall, The Hitman’s Bodyguard is fun in spurts, but it isn’t worth the full price of admission. Reynolds and Jackson do have decent chemistry, and there are a few truly hilarious lines, but that’s about it.