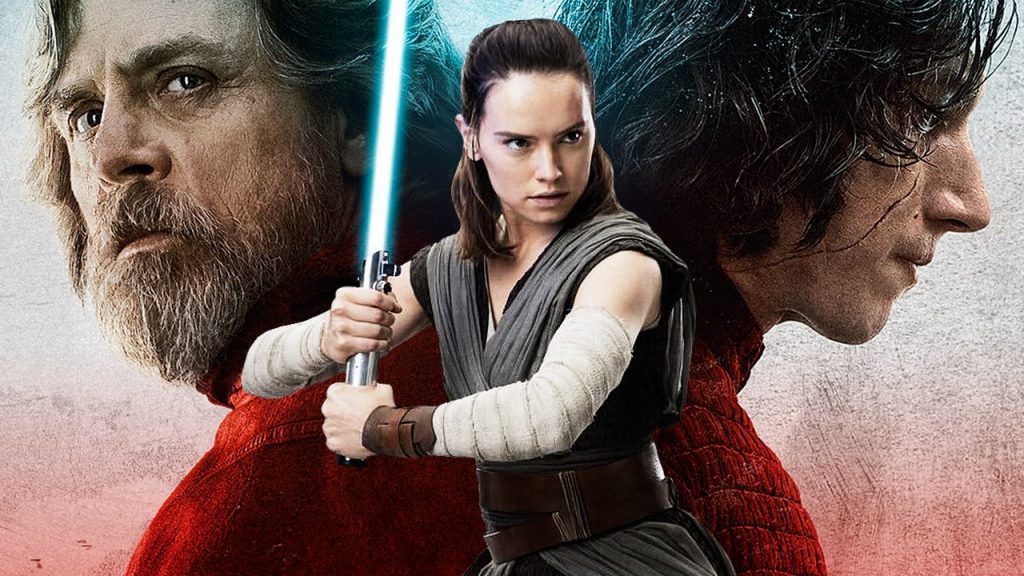 Hope is always present if you believe in it, but doubt is always there as well. Rian Johnson takes a seat in the director’s chair in a galaxy far away for Star Wars The Last Jedi. The Resistance fighters are in a tight spot, as they’re being picked off by the First Order, losing hope with every casualty they suffer. Meanwhile, Rey is seeking the help of the legendary Luke Skywalker, hoping to get him back in the game. Daisy Ridley, Mark Hamill, Carrie Fisher, John Boyega, and Oscar Isaac are back, and they’re joined by Laura Dern, Benicio Del Toro, and Kelly Marie Tran.

In The Last Jedi, Rian Johnson masterfully creates a sense of urgency, and takes the story to places that you don’t expect. Like Rogue One, this film actually feels like a war is raging, but it’s much easier to care for the characters in this film. Johnson writes some truthful moments about the complexities of war and legend amidst the comedic moments and amazing spectacles. Questions from Star Wars The Force Awakens are answered; however, there are still questions that go overlooked. The answers that we do get aren’t always the ones we wanted, but that’s what makes it more intriguing.

The cinematography is visually rich, and this might be one of the best looking Star Wars films ever. There are scenes with sharp reds that pop, especially during some breathtaking fights, there are some tranquil visuals that go along perfectly with the dialogue, and a particular explosion that is simply breathtaking. Johnson directs the action with conviction, and well-built emotion behind what’s going on, even for some smaller characters. It’s evident that the Western genre influenced Johnson’s vision, especially with a particular stand-off scene that is wholly satisfying.

Now, there are a few weak parts in the film that can’t be overlooked. Laura Dern’s character, Admiral Holdo, handles certain situations in a questionable manner with no solid explanation. There’s also a side-mission with Finn and Rose, a new character played wonderfully by Kelly Marie Tran, that feels a bit out of place and slows down the pace sometimes. Then, there’s another moment that just feels odd, and it deals with someone floating in space. Although these parts didn’t feel right, they are well acted, and do not ruin the flow significantly.

Mark Hamill gives his best performance as Luke Skywalker in Star Wars The Last Jedi. Through his failures, he’s grown to believe that the Force doesn’t belong to the feeble minds of men that call themselves Jedi. He’s not the stuff of legend anymore, but a broken man that wants to be at peace and die. Hamill is clearly comfortable playing Luke and manages to be comedic, while still giving depth to a character that has instilled hope in all of us on both sides of the camera. He’s also quite comedic in this film, possibly taking after Yoda in his old age. Luke is not the same Jedi Master he once was, as he’s become a grumpy old man obsessed with his failure; but, deep down, he knows what he can be.

Daisy Ridley gives a stirring performance with what she has to work with as Rey. She desperately wants to find her place and know why her parents abandoned her, and Ridley conveys that so well. Although her backstory isn’t unboxed the way we want it to be, Ridley still manages to make Rey a cheer-worthy character. She doesn’t have any quit in her, especially when the odds aren’t in her favor. There is a significant suggestion given concerning the identity of Rey’s parents, and it’s satisfying if you think about it. Let’s just say Skywalker is a name, not The Force itself.

Adam Driver continues to be an impressive, complex antagonist as Kylo Ren. We learn even more about Ren’s upbringing, and what led him to sink so deep into the dark side. His character is conflicted, yet he embraces the dark even more in this film. Driver does a tremendous job of conveying a furious man, carrying the undying pain of betrayal. There are also some twists that make his character a little more layered, which Driver handles very well. He doesn’t go down the path of Darth Vader, as he becomes another monster altogether.

The supporting cast does a solid job overall. Carrie Fisher lends her presence as Princess Leia/ General Organa one last time, and has some touching scenes. Oscar Isaac has much more to do as Poe, and his character grows up a bit more in this film, while still delivering some sarcastic jabs. Benicio Del Toro and Laura Dern also do great work, which is no surprise, although their screen-time is lacking. John Boyega and Kelly Marie Tran both bring their A-game as well.

The Last Jedi makes plenty of interesting moves that are a breath of fresh air. Yes, Johnson could’ve shaved off some of the Canto Bight Casino scenes, and made Admiral Holdo’s decisions more logical. However, the performances, visual direction, effective presentation of relevant themes, and the boldness it has to push the Jedi lore in new directions overshadow those gripes.  The Last Jedi shows us that legends never die because they live through the people they inspire. Episode VIII forges ahead into new terrain, finding hope in the spark of an iconic Jedi Knight, new heroes, and the “nobodies” that are inspired by them.