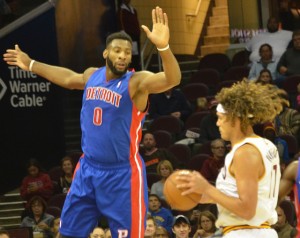 Andre Drummond is good at rebounding.

It seems odd to start an article with such an obvious statement, but I believe it is being overlooked just how effective Drummond has been on the boards this season—especially on the offensive end. Sure, a decent chunk of it can be attributed to the atrocious shooting numbers of the Detroit Pistons’ two most trigger-happy shooters (Brandon Jennings at 37.7 percent, and Josh Smith at 41.7 percent), but that would only explain Drummond’s total number of offensive rebounds.

That number, 343, is 82 more than second-place DeAndre Jordan. In fact, Robin Lopez, third in the league with 252 offensive rebounds this season, is the only other player within 120 of Drummond’s total.

Drummond has also placed himself in a pretty impressive historic position. Drummond’s 17.4 ORB% is the highest mark for an NBA player in the last 16 seasons, and (if he is able to maintain the outstanding rate) makes him one of only eight NBA players to post a percentage that high, joining Dennis Rodman, Jayson Williams, Moses Malone, Chris Dudley, Larry Smith, Popeye Jones, and Marks Landsberger. While the bottom portion of that list doesn’t exactly scream superstar, the first three  are regarded as three of the most efficient rebounders in recent memory.

So why is Drummond still a rarely-discussed subject when the NBA’s best centers are debated? Most likely because he is stuck on a Pistons team that is easy to criticize and hard to watch, thanks in part to the aforementioned chucking by Jennings and Smith. However, how many of the people who discount Drummond so easily have actually watched the Pistons play this year? If they had, they would recognize that the team becomes exponentially more watchable because of Drummond. His tenacity on the boards and the sense of excitement mixed with uncertainty that you get as you watch him pick up momentum headed to the basket is rare to find in a big man.

Player A is 2014 All-Star Roy Hibbert of the Indiana Pacers, while player B is Drummond. Obviously if I included Drummond’s free-throw percentage (42%) it would have been a much more obvious distinction, but where is the fun in that? I was shocked when Hibbert was selected to the All-Star Game, and I am even more shocked that Hibbert is still the front-runner for Defensive Player of the Year in many people’s early award predictions. The reason I chose Hibbert for the comparison is to illustrate just how much playing on a successful team can elevate people’s opinions of certain players. Of course, it would be silly to ignore the fact that Hibbert has a played a major role in the Pacers’ transformation into the top team in the East, but the amount of praise he receives as a top center in the East, while Drummond wallows in Detroit and outperforms him, is ridiculous.

Drummond has also struggled to gain a mainstream following because of the widely-held belief that he has no offensive game, and that he can score on nothing more than putbacks or dunks. While at this point in his career that may be true, the fact that he is grabbing more than 17 percent of possible offensive rebounds means that his chances to score on putbacks and dunks is very high. Take into account that Drummond is 20 years old, and just three years removed from high school, and it becomes a bit more possible to raise his offensive ceiling. Even if his offensive game does fail to develop past the five-to-seven-foot range, as he grows into his body it is likely that he will become an even more powerful force inside.

While we have seen the NBA dote over big men like DeAndre Jordan who lack offensive skill sets in recent years, the lack of excitement around Drummond is surprising. In fact, Drummond has essentially become, in his second season, what Jordan was projected to be but has yet to attain even after six seasons in the league. Of course, playing with Chris Paul and Blake Griffin on a winning team will get you the sort of attention that losing in Detroit will not.

At this point in the season, I believe Drummond’s only hope to be noticed is a series of SportsCenter top play alley-oops, back-to-back 30-point and 30-rebound games, or a video surfacing of him punching Josh Smith in the face mid-timeout for shooting too many jumpers. Although, to be honest, I don’t know if Drummond minds the Smoove jumpers, after all, the more jumpers Smith takes, the bigger Drummond can build his offensive rebound total and perhaps finally be recognized as the most ferocious rebounder in the league.

Until that happens, he’ll keep on putting up the numbers in losing efforts, while other big men (on winning teams) get the praise.