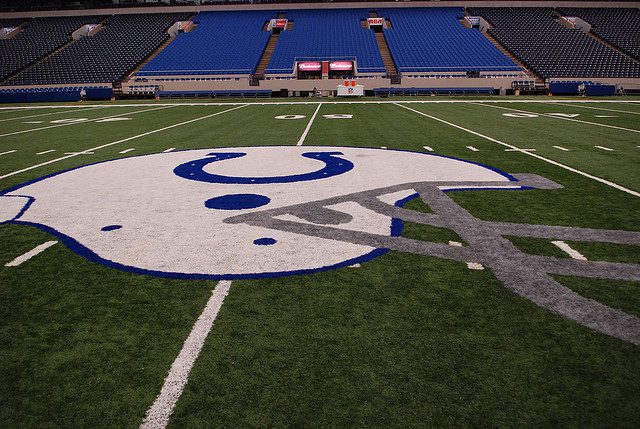 Last season, the Indianapolis Colts ran away with the AFC South, finishing the year with a record of 11-5. But each team in their conference made moves to improve in the offseason: the Houston Texans added to their already fearsome frontline, the Tennessee Titans added a coach with Super Bowl credentials, and the Jaguars made clear strides to respectability.

While the Titans’ and Jags’ improvements are more likely to impact the team’s long-term success, the Texans did enough to challenge the Colts for the conference crown.

Most Important Player: Ryan Fitzpatrick, QB, Houston Texans
He’s been given the keys to an offense that has potential, but really just needs to support a potentially outstanding defense. More on this later.

X-Factor: Health
As one of the weaker divisions, a lot of these teams are depending on a few guys to stay healthy to keep their offense and/or defense together. The Colts are dead without Andrew Luck, the Texans have no depth behind Arian Foster, the Jacksonville Jaguars are very thin on the offensive line, and the Tennessee Titans are shallow at receiver and corner back.

Best Team: Indianapolis Colts
This could double as “Best Player.” Andrew Luck alone makes what would otherwise be a very average team into fringe contenders. More on this later.

Team That Could Surprise: Tennessee Titans
With a new coaching staff in place and a healthy Jake Locker this team can compete for a .500 record, and could have people talking about them making a leap a season from now.

Bold Prediction: Toby Gerhart will rush for 1,000 yards
This goes back to health. If the Jaguars take even a small step forward this season and the offensive line stays healthy, the bruiser from Stanford has a chance to show he can be a lead back in the NFL.

Defensive Player of the Season: Who else? J.J. Watt, DE, Houston Texans

Houston Texans
It’s not very often one can say that the signing of Ryan Fitzpatrick really stabilized a quarterback situation. But that’s exactly what happened to the Houston Texans this offseason. Granted, after the season Matt Schaub had last year, an upgrade wasn’t hard to find. The Harvard alum will have talented skill players around him: Andre Johnson and DeAndre Hopkins will vie for the best one-two punch at wideout this season, and Arian Foster, if healthy, can still be an impact player. But that’s a big “if” considering the Texans’ depth at running back. Behind Foster sits LSU rookie Alfred Blue and Jonathan Grimes, a third-year player with 21 carries to his credit. The offense is hanging from a string, but there’s talent there.

Thankfully, Fitzpatrick might not need to do much more than a 2009-10 Mark Sanchez impression: avoid losing games so a great defense can win them. Their front seven sports four first-round picks: J.J. Watt, Brian Cushing, Jadeveon Clowney, and Whitney Mercilus, and a second-rounder in Brooks Reed. The Watt-Clowney combination upfront has the potential to be menacing, but it’s going to have to be in order to support an inexperienced defensive backfield. If the front seven isn’t near the top of the league in pass rushing, a backfield that was third-last in average passing yards allowed per game and lost Ed Reed and Danieal Manning, could be exposed.

Indianapolis Colts
The Colts have the inverse of the problem the Texans have: immense talent a quarterback, but not a lot around him. An already shaky offensive line got a little shakier. After releasing two-year starter Samson Satele and choosing not to re-sign utility lineman Mike McGlynn, the Andrew Luck finds himself receiving snaps from Khaled Holmes, who played for all of 12 snaps last year as a Colts rookie. Expect a bad rushing offense to get worse this year, especially if Trent Holmes sees the bulk of the handoffs. The jury’s out on how much his “backup” Ahmad Bradshaw can contribute, too. Not only is his career on the decline, but his contact running style is very similar to that of Richardson. In the air, Luck will have his three leading receivers from last year back: T.Y. Hilton, Coby Fleener, and Reggie Wayne. They’ve also added Hakeem Nicks. It will be interesting to see how much he can give to the Colts offense.

A defense that ranked ninth in scoring but just 20th in yards allowed lost its veteran leader to free agency in Antoine Bethea (San Francisco 49ers). But they made their share of acquisitions, including former Baltimore Ravens defensive end Arthur Jones and former Cleveland Browns linebacker D’Qwell Jackson, who will be started and left end and left inside linebacker, respectively. The team gave cornerback Vontae Davis a guaranteed $20 million to stay, and he’ll combine with free safety LaRon Landry to keep the secondary afloat despite the loss of Bethea. Look for second-year player Bjoern Werner to break out at linebacker; he’ll have his chances considering the amount of attention teams pay Robert Mathis.

Andrew Luck and an improved defense will lead the Colts to the playoffs for a third year in a row.

Jacksonville Jaguars
It might not show in 2014, but coach Gus Bradley and general manager Dave Caldwell have initiated theo long process of adding young talent and bringing it along slowly. The biggest piece in this amassing of talent? Blake Bortles, who was the first quarterback taken in the draft this year. He may start the season backing up veteran Chad Henne, but look for Bortles to take over during the season, and earlier than one might expect. Zane Beadles was a big addition at left guard, but an overall lack of depth up front on offense could spell doom for first-time full-time starting running back Toby Gerhart. Gerhart’s shown the potential to be a starting back, but the Jaguars have regularly been at the bottom in rushing offense the last few years. However, they’re not as hopeless in pass blocking scenarios, which will provide Henne, then Bortles, enough to find receiver Cecil Shorts and tight ends Mercedes Lewis and Clay Harbor.

Look for the Jags defense to surprise some people, particularly on the line. Andre Branch had a more than solid second half last year, and his performance will be supported by three strong free-agent signings: Chris Clemons, Ziggy Hood, and Red Bryant. The front four will be backed by a solid linebacking corps, highlighted by Paul Posluszny and newcomer Dakoda Brooks.

Tennessee Titans
The biggest addition to the Titans this offseason won’t play a down this year. Head coach Ken Whisenhunt brings Super Bowl experience, and a history of getting everything out of his quarterbacks. That could be huge for Jake Locker, who has only started 18 games in the past two seasons due to injury. Locker will have talented young targets in Justin Hunter and Kendall Wright and a solid veteran receiver in Nate Washington, but not much else in the way of pass catching. The team added considerably to their offensive line and it should be the team’s greatest strength, but who knows if rookie and probably starter Bishop Sankey has what it takes to take advantage.

A team that was in the middle of the pack in points and yards against last year takes a huge hit in losing cornerback Alterraun Verner. They still have Jason McCourty, but with all the good receiving tandems in the conference, that might not be enough.