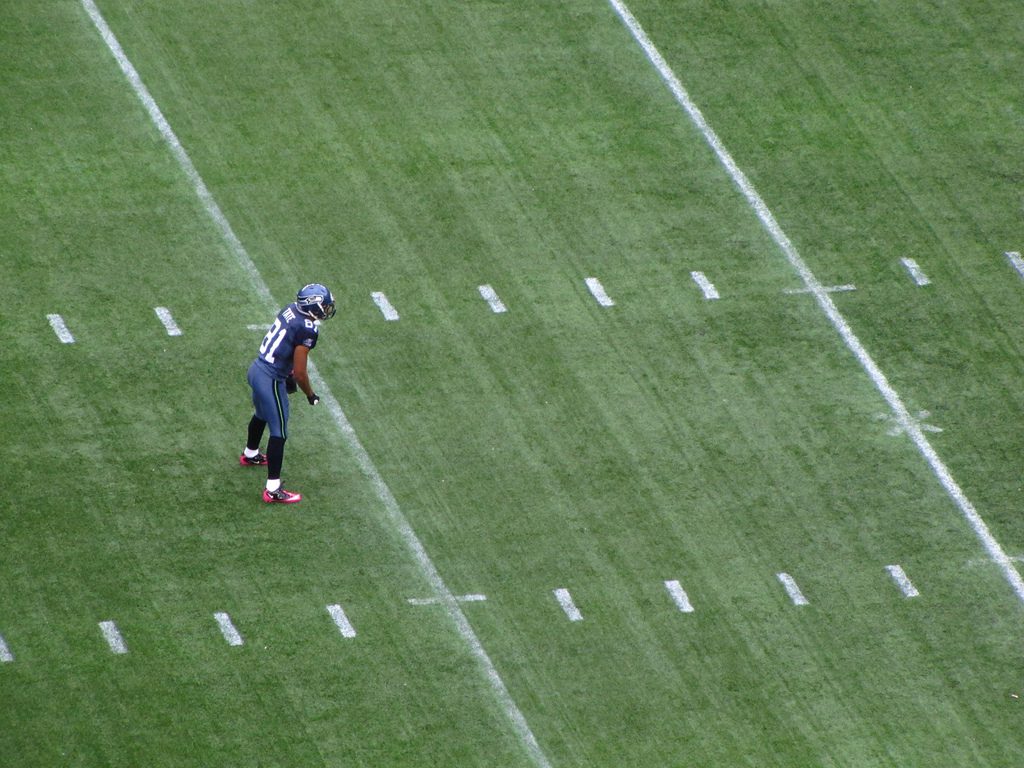 NFL wide receivers don’t typically make as immediate an impact in their rookie seasons as their running back brethren. Where backs carry over the mindset of “see the hole, hit the hole” from college, wideouts must adjust to NFL coverage rules on the fly and master the art of making space.

As a result, many receivers break out in their third or second season. Five second-year wide receivers ranked among the top 30 in fantasy: Alshon Jeffery, Josh Gordon, T.Y. Hilton, Michael Floyd, and Kendall Wright.

What receivers will break out in 2014?

Hopkins is the most obvious candidate for a breakout season at wideout. He had a solid rookie year, posting just over 800 years and two touchdowns. Like Alshon Jeffrey before him, he’s not a total burner, but he has good size and really knows how to use his body. Also like Jeffery: Hopkins’ hands. The Houston Texans WR dropped only one pass last season. One pass. He had difficulty separating from defenders last season, but that’s expected of a young wideout. If he figures that aspect out, he’s in for a big year.

The most likely hindrance to Hopkins putting up big numbers? Quarterback play. Ryan Fitzpatrick is slotted as the Texans signalcaller in 2014-15; then again Hopkins put up 800 years as a rookie with the Matt Schaub-Case Keenum-T.J. Yates turd sandwich. Speaking of sandwiches …

The Eli Manning Receiver Academy has two specialties: maximizing the value of below-average tight ends (remember Jake Ballard?), and bringing wideouts along from out of nowhere to the Pro Bowl. Victor Cruz appeared in only three games for no catches as a 24-year-old rookie in 2010. A year later he caught 82 passes for 1.536 years and nine touchdowns. Steve Smith (the other Steve Smith) had eight catches for 63 yards as a rookie in 2007. Two seasons later he notched 1,220 receiving yards and seven TDs as one of the best third-down safety valves in the league.

Randle is entering his third season and came into the league as a much more heralded prospect than Cruz and Smith. As a rookie he only caught 19 passes for 298 yards. But his 611 receiving yards and six TDs from 2014 are actually impressive considering the drunk baby that was the Giants offensive line last season.

Between Hakeem Nicks’ departure and the considerable upgrades to the G-Men frontline, Randle has the potential to form a lethal one-two punch with Cruz. A real sleeping Giant.

The Drew Brees Wideout Institute is the Eli Manning Receiver Academy on speed. In a much more pass-heavy scheme, the New Orleans Saints have succeeded for years by spreading the ball around to a deep cast of receivers with varying skill sets.

Speaking of speed, Kenny Stills has it. A lot of it. The former high school track star put up 2,594 receiving yards in his four years at the University of Oklahoma.

And those skills shined in his rookie season—he led the NFL in yards per reception (20), putting up 641 yards on only 32 catches. With a year of seasoning and a developing rapport with Brees, look for his targets to go up considerably this year.

It’s worth pointing out, however, that he’ll be more valuable to the Saints than he will be to fantasy owners this year. His primary role will be running sprints up and down the sideline, so while he’ll definitely get thrown to, he’ll often have the effect of a decoy, stretching out the defense for Brees to operate underneath.

At 26, undrafted second-year wideout Kenbrell Thompkins is a little more seasoned than his peers on this list. But that doesn’t make his potential any less explosive.

He showed flashes last year, posting 466 yards and four touchdowns in only 12 games (eight starts), including a 127-yard, one-touchdown performance on the road against the Atlanta Falcons in a 30-23 victory. But typical rookie problems, such as a less-than-mastery of the New England Patriots’ playbook and dropping 11.11 percent of catchable balls thrown his way, interfered with a consistent season.

After an offseason of studying (hopefully), Thompkins looks primed to take a step forward. He’s developed a rapport with Tom Brady, and it’s showed in the preseason.

With more years of NFL service under his belt (four) than anyone else on this list, and with an 898-yard season already under his belt, he seems a little out of place here.

A few facts to consider: Tate has increased his receiving yards totals in each of his first four years (227, 382, 688, 898); the Detroit Lions love to pass (the Seattle Seahawks, not so much); last year he lined up next to Doug Baldwin, this year he’ll take the field with Calvin Johnson.

Stir that all into the 2014 Detroit Lions stew and what do you get? A big year for Golden Tate.