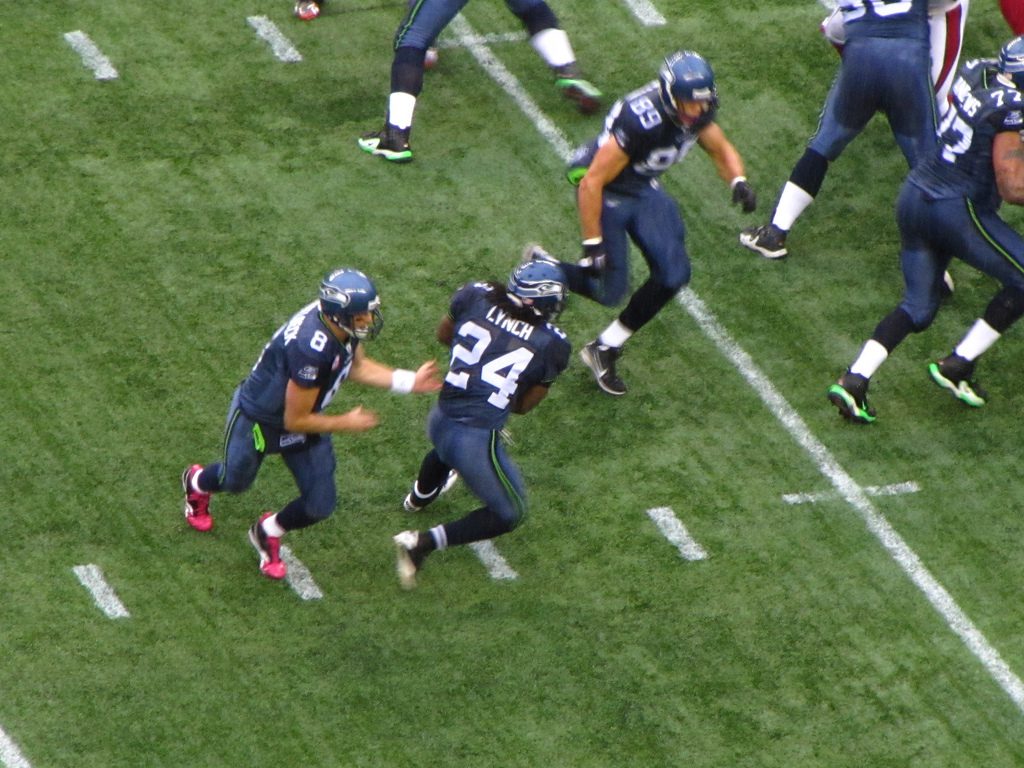 Gone are the days when the NFC West was the laughing stock of the NFL, when they infamously sent a 7-9 Seattle Seahawks team to the NFL Playoffs because that was the best the division had to offer. The NFC West is just plain scary now, from top to bottom. And, if you recall, that 7-9 Seahawks team beat the highly-touted 11-5 New Orleans Saints team in the 2010 postseason.

The division also has the consistently dominant San Francisco 49ers under the tutelage of head coach John Harbaugh; the Arizona Cardinals, who somehow missed the playoffs despite one of the most impressive performances in franchise history; and the St. Louis Rams with their array of youth and potential who still managed to put up a 7-9 record last season.

Even with all the recent success and promise of a brighter future for the three teams, they still have to face the Seahawks and their historically dominant defense. Oh yeah, and the Seahawks are also coming off a Super Bowl victory—one of the most one-sided affairs in the 48-year history of the championship game.

Most Important Player: Russell Wilson, QB, Seattle Seahawks
No one said being this good this early in their career would be easy.

Of course the quarterback who won the most recent Super Bowl is the most important player in the division, so why repeat that? As effective as Wilson has been with the Seahawks, many forget that he is entering only his third year in the league. He’s the first of the new generation of quarterbacks to get to the Promised Land. Hoisting the Vince Lombardi Trophy in your second year is a feat in of itself.

But as impressive as that is, it’s also a heavy burden for such a young star. Now Wilson must keep up his stellar numbers to repeat as Super Bowl champion and also to get paid, given that he is still in the middle of his four-year rookie deal that pays him approximately $2.9 million every season. Wilson is a definite bargain for Seattle right now, but that might not last if he keeps exceeding expectations.

X-Factor: The replacements
Just because this division is stacked from top to bottom does not mean there is a lack of shuffling going around. In fact due to injuries and suspensions, all four teams are playing catchup in order to improve on positions that were previously thought to be fine. The San Francisco linebacker corps is now depleted for the first half of the season due to an injury and suspension (which will be discussed later in the column). Arizona is currently facing the same woes with linebacker Daryl Washington, who is suspended for the entire 2014 season, as well as defensive end Darnell Dockett who recently tore his ACL. Of course the biggest NFC West players to succumb to an ACL injury, quarterback Sam Bradford, squashes most, if not all, hopes of a more prosperous NFL regular season.

The Seattle Seahawks, in comparison, have few worries, but their top receivers have changed. Golden Tate and Sidney Rice are no longer with the team. Tate signed with the Detroit Lions and Rice decided to retire during the offseason. In their place are Percy Harvin, Doug Baldwin, and Jermaine Kearse—all of which are already accustomed to Pete Carroll’s play-calling.

Best Team: Seattle Seahawks
All four teams have a promising future. You can argue that if placed in separate divisions, all four would easily make the playoffs. Unfortunately that’s not the case, so the Cardinals, Rams, and 49ers still have to compete with the reigning Super Bowl champions.

As good as the Seahawks have proven they are, they are barely reaching the apex of their full potential. Offensive coordinator Darrell Bevell is revamping the team’s offense in order to better fit Russell Wilson’s abilities. Running back Marshawn Lynch and the Seahawks also agreed on a pay increase this offseason, per Pro Football Focus, but that doesn’t mean his production will decrease as a result. And although Lynch’s rushing yards slightly dropped from 2012 to 2013, the 28-year-old running back saw an increase in receiving targets, a direct result of Wilson’s style of play. Look for more productivity from this running back-quarterback combo in 2014.

Team That Could Surprise: Arizona Cardinals
The Arizona Cardinals have all the tools in place to surprise many in the NFL. If quarterback Carson Palmer can limit his interceptions in his second season as a Cardinal—he had an abhorrent 22 last year—the team can exceed all expectations and make the playoffs. In fact, last year they were simply unlucky, being just the 19th team since 1978 to win 10 games and miss the playoffs.

Running back Andre Ellington is also now taking the reigns as the No. 1 back from the now-retired Rashard Mendenhall. The increase in touches in conjunction with the rebuilt offensive line, one that has been the cause of painstakingly agonizing headaches for years, bodes as a good sign for Cardinals fans.

If everything clicks for the team, they might have a good shot at dethroning the Seattle Seahawks as kings of the NFC West mountain. But they need to do this sooner rather than later. Palmer is getting older, and so is star wide receiver Larry Fitzgerald, who looks to be committed to a fault to the paltry Arizona Cardinals. Serious contention may change that perception.

Bold Prediction: The San Francisco 49ers will flop and regain momentum too late into the season
For a division comprised of a mostly young core, the San Francisco 49ers are comparatively the old regime in the division with established franchise-defining players like Frank Gore and Vernon Davis. 2014 could be the year that the collective age of the 49ers becomes their most formidable opponent.

There is also the plague of missing stars. Linebacker NaVorro Bowman is out at least half the regular season due to an ACL injury suffered in the NFC Championship Game against the Seahawks. Fellow linebacker Aldon Smith will also miss nine games this season as a result of violating the NFL’s personal conduct policy. Losing two All-Pro caliber stars in Smith and Bowman for so long will result in divisional defenses attacking what will essentially be second-string linebackers. This may result in more losses than Harbaugh and company would like. However, Smith and Bowman will return during the season. The only question is: will it be too late for the San Francisco 49ers to make a late-season surge into the playoffs?

Offensive Player of the Season: Larry Fitzgerald, WR, Arizona Cardinals
In 2013, Larry Fitzgerald improved on the previous season’s numbers with 200 additional yards and six more touchdowns, placing him in the bottom half of upper echelon receivers. But given his high ceiling, even those numbers are pedestrian. Palmer’s (assumed) decrease in interceptions will translate into more targets for the face of the franchise. In spite of the powerhouse defenses that Cardinals must face this season, Palmer can still feed the ball to Fitzgerald, leaving the All-Pro receiver to his own devices.

Defensive Player of the Season: Robert Quinn, DE, St. Louis Rams
It should be no surprise that Rams defensive end Robert Quinn is a favorite to be the division’s defensive player of the season. But prior to Sam Bradford’s injury, the Rams were poised for an offensive surge that would complement the dominant young defensive core. Unfortunately, that is not the case anymore as backup quarterback Shaun Hill is set to take the reins due to the unforeseen injury to Bradford. But not all is lost. The Rams defensive unit will be the glimmer of hope for St. Louis fans this season. Quinn’s season, in particular, is one that fans need to keep an eye on. In only his third year, he managed to tally up the second-most sacks in the league with 19. In 2014, he is looking to improve on that number. That production alone should strike fear in divisional opponents. Look for Quinn and the Rams to unfortunately pile up the losses but potentially play spoiler for division rivals throughout the season.