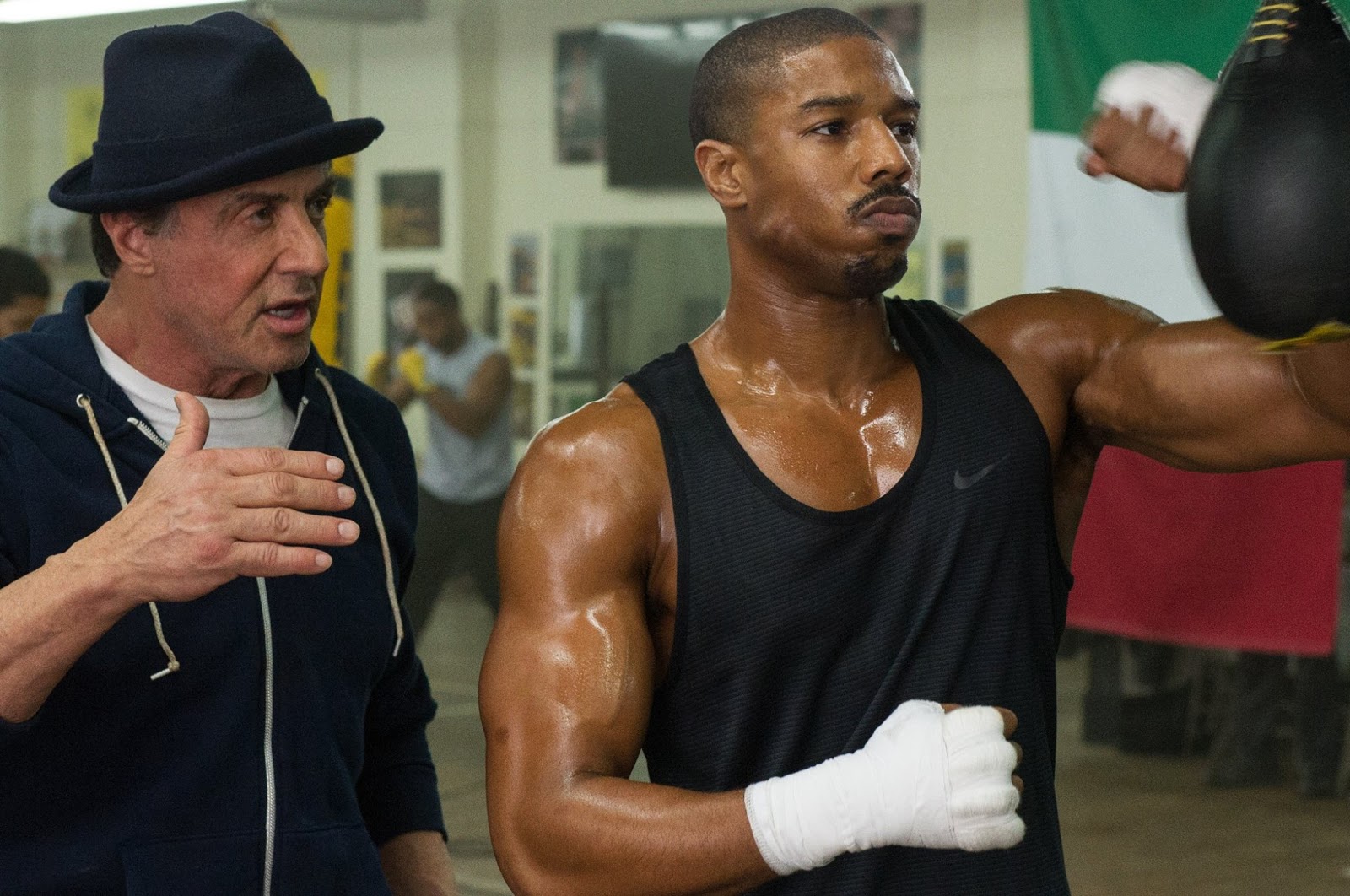 Welcome to the conclusion of Rocky Week here at Baller Mind Frame’s Pop Culture Spin! Over the course of the past week BMF Editor Sonny Giuliano and PCS Writer Dalton Baggett have teamed up on a number of Rocky themed write-ups in anticipation and celebration of the Rocky spin-off Creed that was released on Thanksgiving Day. Today, they each offer their thoughts on Creed.

Before reading forward in our review, you can check each entry from Rocky Week below.
The ‘Rocky’ Training Scene Power Rankings
Talking ‘Creed’ With Writer Aaron Covington
Who Would Win: Clubber Lang vs. Ivan Drago

As I sit here in my Rocky t-shirt, with Rocky IV on the TV in the background, it’s hard for me to argue against it as the greatest Rocky film of all-time. However, if there is anything that could make me doubt this mindset, it is the newest installment in the Rocky film franchise: Creed.

It took one viewing of Creed for it to solidify itself in my top three of all-time favorite sports movies. It really is THAT good. I’m almost upset that there may be some of you who haven’t seen this movie, and are spending precious time reading this review rather than experiencing it for yourselves.

You’re here, though, so let’s jump right into why this movie is making me consider spending the ridiculous amount of money it would take to see it about five more times in theaters. Sylvester Stallone delivers an absolute masterpiece in this movie and I wouldn’t be surprised at all to see him nominated for an Oscar as best supporting actor. Besides the original Rocky this is the man’s best work in what is a long career.

Granted, many of his films were more about guns, explosions, and sometimes arm-wrestling than great acting, this is still saying a great deal. He’s finally not the boxer anymore, and completely embraces his role as the mentor/guardian of the young Adonis Johnson/Creed. His monologues had me both tearing up, and also mentally preparing myself for the championship bout I will never actually be a part of. I was ready to go about 10-rounds of slap-boxing with Sonny after we got out of the movie, but he wasn’t having it.

Sly proves that he deserves the spot as the second-best wise, old mentor in movie history. Sorry, but Obi-Wan Kenobi will always have the top spot in my book. This movie was great in so many ways, but without Sylvester Stallone’s performance, it would just be your average boxing flick. Sly brings emotion and nostalgia to the role that would’ve been impossible for anybody else. The chemistry between him and Jordan was electric, and it really brought the film to near perfection.

Michael B. Jordan has a much smaller sample size than Stallone, but it is safe to say this is his best work as well. There is a definite argument that can be made for his acting in Fruitvale Station, and it really is a toss-up. Shout out to Ryan Coogler for his writing and directing in these two films. Aaron Covington, too, who penned for both movies and who Sonny and I had the pleasure of interviewing about his work on Creed. Jordan is showing that he is an up-and-comer who is consistently putting out great work (Minus Fantastic 4 but it is safe to say that was 0 percent his fault).

He plays the underdog extremely well, and it’s easy to see him as the son of Apollo Creed who just wants to make his own way in the world. Adonis goes through every day with a giant chip on his shoulder, and Jordan portrays this aspect of the character to perfection. There isn’t a moment of his acting in the film where you think he is 100 percent okay emotionally. There is always something there behind his eyes that says he could lash out at any moment. It takes some serious skill to act in a way that has the audience waiting for a certain reaction. This type of character and story resonate so easily with an audience and part of why these movies are consistently fantastic. (In Sonny and I’s world, Rocky V never happened, so no comments about that movie).

If I have one complaint about Creed, and believe me when I say that I’m reaching here, it’s that the audience didn’t hate the antagonist enough. Ricky Conlon wasn’t at all easy to like, but he just didn’t have me hating him enough to truly want him to get his ass beat. In what is sure to be a guaranteed sequel, I hope they give us an antagonist like Clubber Lang or Ivan Drago that makes you scream at the screen when something goes for or against young Adonis in the ring. That being said, the cinematography of the fight scenes in Creed was incredible and had me jumping back when the right punch landed. There is a specific sequence where Creed and Conlon are trading blows that is absolutely stunning to behold.

Creed had everything it needed to fit itself perfectly into the Rocky Universe. Taking classic elements and putting a new spin on them was exactly what it needed to do to create a brand new generation of fans. I’ve wasted just enough time writing about this movie when I could be out there watching it again, and again, and again. Do yourself a huge favor and when you go see this movie, buy two tickets. One for the first showing, and the second for the showing immediately after. Trust me, you’ll thank me later.

I’m here to evaluate the place of Creed in the Rocky franchise. I’ll try to do so without spoiling any of the movie for those of you who haven’t seen it. I’ll also try to proceed without bashing you over the head with hyperbole or resorting to too much fanboy-ish gushing or prisoner-of-the-moment praise, though that will be difficult considering I’ve already made it clear on my personal Facebook page that this is not only the best movie of the Rocky franchise, but quite possibly the best sports movie ever.

I’m sure Dalton and I have already lost some credibility with our audience by crowning Creed the best of the Rocky franchise. This must be something like suggesting to the basketball community that there could possibly someday be a better basketball player than Michael Jordan. Usually making that statement or any similar claim results in quite a bit of hysterical yelling, followed by god-like praise towards the entity which you have seemingly knocked.

Only this is not a knock on Rocky, or any of the other Rocky movies (except for Rocky V) … it’s simply a statement that I’m more than comfortable making at this point in time. Go ahead and call it blasphemous that I dare suggest that this new film, one which admittedly is a copycat of the original in many ways, is possibly better than the original. And remember, people, this isn’t a bad thing.

Creed is being short-changed because it followed a familiar formula that was discovered forty years ago with Rocky. I don’t care that Creed didn’t tell the most original story. What fictional sports movie hasn’t followed that Rocky underdog formula to a certain degree? And even more impressive, name me a fictional sports movie that managed to have so much heart AND feel so original despite the fact that it was a sequel, let alone the seventh movie in a franchise.

Creed took all of the right ingredients from that Rocky formula, added a few of its own, and made its delicious concoction of a film. We as a movie-going society are nostalgic about Rocky … it was the epitome of an underdog story, and it was masterfully crafted, brilliantly acted, and revolutionized sports film for the better. Creed manages to feel just as nostalgic as the original does, yet it’s brand new, and it is able to stand on its own two feet thanks to a modern-day grittiness, impeccable writing/cinematography, and performances on the screen that are both praise and Oscar-worthy.

Michael B. Jordan once again solidified his place in the conversation of the best young actors in the business, and left no doubt that he is perfect figure-head for this franchise moving forward. Burgess Meredith was never as good as Sly Stallone, who demolished every scene he was in and showed a side of himself, and the Rocky character, that I didn’t expect to ever see. Stallone was simply amazing, offering his greatest acting performance since the original Rocky. Talia Shire wasn’t as compelling or as easy to like as Tessa Thompson manages to be while embodying Donnie’s love interest Bianca. And collectively, you were pulling for everyone the entire time. The stakes felt real and the love between the characters felt legitimate. You felt like Rocky cared about Donnie, and you felt like Donnie cared about Rocky, and because of that, you really cared about the two of them as they both fought their high-stakes fights.

On top of the acting, the training scenes, from early on until the final one, were top notch and the climactic fight between Creed and Conlon was arguably the best in the entire history of the Rocky franchise, from both a cinematography and drama standpoint. And speaking of fighting, I’ll battle anyone who sees this movie and doesn’t agree with me that the best “Rocky Steps” moment in the history of the franchise happens in Creed. And I don’t mean we’re going to have a verbal altercation. I mean we’re going toe to toe in a fist fight.

When I saw Creed on Friday night with Dalton, I walked out of the theater in a fog trying to process just how good the movie was. I was so overwhelmed that I actually passed on the chance to whoop his ass in a slap boxing match. Then I went and saw Creed again on Sunday with my father, and I once again left the theater absolutely satisfied from both an entertainment and emotional standpoint.

How often does a movie hit both of those check points? Once or twice a year, maybe? How often does a movie aggressively hurdle both of them and veer into “I’ll always remember watching this masterpiece of a film for the first (and second) time” territory? I don’t know that its ever happened in my movie-going experience. And that’s how I know Creed is on top. You can say there have been many movies before just like it. But then again, from where I stand, there never has been a movie quite like Creed.