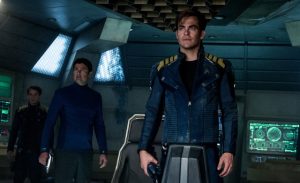 Space is endless, and just like time, it can change things. Star Trek Beyond is the third installment in the successfully rebooted franchise, and this time around, Justin Lin is in the director’s chair. The USS Enterprise takes a mission to venture off into uncharted space, and  run into an enemy born from the darkness. Chris Pine, Zachary Quinto, Karl Urban, Simon Pegg, Zoe Saldana, John Cho, and the late Anton Yelchin all reprise their roles for another adventure. Joining them are the talented Idris Elba, and Sofia Boutella.

The script develops Captain Kirk even further as a man dealing with the monotony of space life, and concern for his legacy. It touches upon the need for a purpose, as well as our yearning for novelty. It also shows Spock contemplating the footsteps of Ambassador Spock, hinting that this might be their final mission together. In moments, it really does dig deeper into some of the characters, and even the villain, Krall, is fleshed out enough that we feel for him a bit. Simon Pegg is one of the screenwriters, and you can tell that the comedy is a bit sharper than usual too, thanks to the talented geek. The script balances the right amount of humor, character development, and action that’s needed for a noteworthy blockbuster.

Lin, known for his impeccable action set pieces in the Fast and Furious series, doesn’t let us down in this film. He takes the USS Enterprise and  drags it through all sorts of hell, and it’s a blast to watch. On top of that, the fight scenes are quite entertaining, especially ones with Jaylah, the badass alien sporting the white and black warpaint. This flick will definitely knock you down with its action, but not as much as its simply touching moments; for example, a scene with a character staring at a particular photograph.

Everyone in the talented cast gets to shine. Chris Pine and Zachary Quinto continue to impress in their respective roles as Captain Kirk and Spock. They slip right back into the roles, and age along with the characters’ mindsets perfectly. Kirk is still brash, but has developed into an amazing leader, and Spock is still cold and calculating, but knows when to open up and attempt to connect. They know they need each other to successfully run the USS Enterprise, but they also know that their paths may part ways some day.

Karl Urban continues to shine as Bones, the doctor that loves to verbally snipe away at Spock, while catching fire in return. Simon Pegg is as witty as ever playing Scotty, lending his comedic timing to the role perfectly. Idris Elba shines as Krall, and although the character isn’t too unique of a villain, Elba fiercely delivers the goods. Finally, there’s Soufella Boutella playing Jaylah, the alien warrior that seems to steal most scenes that she’s in. Collectively, the cast is fantastic, and make up for the familiar storyline.

Star Trek Beyond touches upon the fear and beauty of being lost in space, as well as being lost in your own thoughts. It’s quite a fun, entertaining flick with the right touches of insightful moments throughout. The film continues an amazing Star Trek film series that deserves to continue it’s journey.