On Wednesday morning the trailer for Creed II dropped and my goodness, it was incredible. In order to celebrate and properly appreciate this two minute glimpse into the highly anticipated sequel to 2015 hit Creed (a spin-off of the Rocky film franchise) Hardwood and Hollywood’s two Rocky experts, Sonny Giuliano and Dalton Baggett, engaged in a game of Question and Answer to break down what we saw in the trailer and what’s to come in November when the film is released.

Why do you think we don’t get a look at Papa Drago? Is it going to be a super dramatic scene they don’t want to give away? Or do people our age just not know who he is so it wouldn’t really add anything to the trailer?

For many different reasons, I think this is an absolutely fantastic trailer, and one of the biggest reasons is that we don’t see Ivan Drago. We see a ton of what is going to exist in this film and based on Rocky films of the past we can speculate about what’s to come in Creed II, but we know almost nothing with certainty based on what the trailer shows us.

We don’t need to see Ivan Drago in the initial trailer — I would speculate that we’ll see him, at least briefly, in future trailers that are released closer to the premiere date — but for this first theatrical trailer all we needed was the one shot of “Drago” on the back of the robe and the crippling right hook that Baby Drago delivers to Baby Creed at the end of the trailer. Not gonna lie, I got honest-to-God goosebumps when I saw “Drago” on the back of that robe, and I knew it was coming. I knew that Dolph Lundgren was in the film reprising his role as Ivan Drago, and I knew that Florian Munteanu, a Romanian actor and boxer who is a perfectly put-together statuesque human being, was cast as Drago’s son … and still, I was shook.

It’s safe to assume that anyone who is interested in seeing Creed II has seen Creed, and if you’ve seen Creed you’ve probably seen all of the movies in the Rocky film franchise (with the exception of Rocky V). If you see the name “Drago” you know what it implies. You know who we’re talking about. And because of that, it’s better to come into Creed II with Ivan Drago more of a mysterious concept than an actual person. We know the person exists, but at this point, we don’t know where his life is. That only adds to the intrigue.

This movie was penned by Rocky himself, Sylvester Stallone. How sure are we that it doesn’t end with Rocky taking on Drago’s son in a street fight outside of the arena after Adonis is murdered just like his father? Also, knowing this, would you still pay to see it?

First of all, this will never happen, so stop being ridiculous. Second of all, I’m all about Rocky Balboa and Ivan Drago putting the dukes up in street fight outside of the arena after Adonis and Baby Drago finish their bout. And third, you could tell me that Burt Young was reprising his role as the impossibly annoying Paulie Pennino and I’m still paying as much money as Regal Cinemas requires me to in order to see it. Wild Horses couldn’t drag me away from the theater on Black Friday, and neither could a ridiculous post-Boxing match street fight.

Based on the shot of Michael B. Jordan (Adonis Creed) throwing punches underwater, does this movie already have the best Rocky training montage? 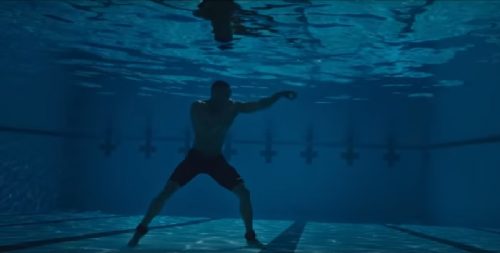 (Note: This isn’t a Power Rankings of montages as a whole. That list exists right here, and for what it’s worth, the training montage for the Creed/Conlon fight in Creed currently sits atop my list of the best training montages in the Rocky/Creed film series.)

(Another note: I’ll probably catch shit for this list because of some unconventional choices. The quicker that everyone realizes that they should defer to my judgment for all things Rocky/Creed, the better.)

1. Adonis running alongside the ATV’s and Motorcycles (Creed)

4. Rocky at full-sprint with a massive crowd behind him (Rocky II)

6. Rocky sick with Adonis outside of the bathroom (Creed)

7. Rocky and Apollo slow-motion running/celebrating on the beach (Rocky III)

8. Rocky pressing the carriage with Adrian, Paulie and Duke inside of it (Rocky IV)

9. Adonis and Rocky both hitting the speed-bag (Creed)

Are we assuming that when Adonis wakes up in the hospital with Bianca at the start of the trailer, it’s after his first fight in the movie, most likely a championship bout versus Danny “Stuntman” Wheeler? And as a related aside, do we expect that Little Duke will train Adonis for his fight with Drago’s son?

It’s very nice of you to pose the first part as a question, when really you meant it as “this is the correct assessment.” I know because I also had a question about the hospital while we were preparing and you quickly told me why I was wrong. So yeah, I guess it’s most likely because of a championship bout with Danny “Stuntman” Wheeler.

For the next part, I have a confession. Let me preface this by saying that I have watched the Rocky films quite a few times, and Creed is one of my favorites. I had zero idea that “Little Duke” was Duke’s son. Now that seems dumb, but I also didn’t know his name was “Little Duke” until you wrote it and I had to look up who he is. This makes me look terrible, but I’m nothing if not honest.

Sure, he probably trains Adonis, if for nothing else but the call back to the original films.

Is there a more perfect song for this trailer than Kendrick Lamar’s ‘DNA’?

I can name a couple:

‘Eye of the Tiger’ – Survivor

I’m just kidding, they would be terrible for this trailer. Bet they’re stuck in your head now though.

The answer is no, there is not a more perfect song for this trailer. The editing is phenomenal, and it has gotten me pumped up every one of the 20 times I watched the trailer. This movie is going to have an incredible soundtrack. I’m ready.

Looking at this from a big picture perspective, and since you are qualified to discuss the matter since you once wrote that Dunkirk had the best movie trailer of all-time, where does the Creed II trailer rank on that imaginary list?

Ok, that Dunkirk piece I did is actually very embarrassing in retrospect. I had no idea that Dunkirk was a real place where a real historic and important battle took place. I even theorized there could be some sort of monster involved. I’m cringing thinking about people reading it.

I’m not making myself look even a little bit smart in this piece, so thank you for the wonderful questions, my friend.

To your question, I couldn’t begin to put together even an imaginary list of the best movie trailers of all time. There is just way too much data. All I know is that 99.9% of movie trailers are trash, and the ‘Creed II’ trailer is the opposite of trash. It is the LeBron James of movie trailers. You know what that means right?