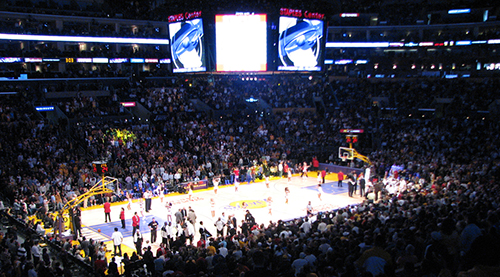 The elimination of 23 teams up to this point in the Fandom Games has been based entirely on the organizations themselves, parsing transactions and examining management and determining which single franchise is most worthy of a fan’s support for the coming season. One underrated and unaddressed aspect of this process is the character of the fan base itself. Supporting a team for a single season entails membership in an existing fan community, and so the passion, commitment and value of those fan bases need to be considered

With seven teams remaining, today’s elimination will be dictated by the appeal of the particular fraternities that have coalesced around these remaining franchises.

There are any number of anecdotal factors that come into play here. Fans of the Golden State Warriors are widely regarded as the NBA’s most passionate, and Oklahoma City Thunder supporters developed a reputation during the temporary relocation of the Hornets following Hurricane Katrina. Followers of the NBA’s flagship franchises are some of the most entrenched, including the Boston Celtics and New York Knicks. But the Fandom Games previously eliminated each of these four franchises for their respective sins, so other factors are forced into the fray.

Consider the Memphis Grizzlies. Their crowds are well-regarded, yes, but do not carry the unique reputation of the Warriors or the Portland Trail Blazers. But what the Grizzlies have captured is the unique symbiotic relationship between community and team that idyllically defines professional sports. The Grizzlies, as they are currently constituted, are not just some brand but an organization that has captured the adoration of its fans via hard work, accessibility, and sincerity. Fans of the Grizzlies defy modern conventions of fandom. This is a true community that would be an honor to join.

The Dallas Mavericks are not dissimilar. Unlike Memphis, Dallas fans have several sports options, including the high-profile football Cowboys. And yet the Mavericks frequently fill the arena, and the crowds are raucous. Mavericks supporters rode out year after year of playoff eliminations in part because the franchise belongs to the fans, with highly regarded fan relations, a valiant and honorable centerpiece in Dirk Nowitzki, and an owner sitting right down front. Things have shifted a bit post-championship, but the fan base in Dallas remains a proud collection.

San Antonio Spurs fans can at times have a bad case of the high-and-mighty, no question, but it’s hard to blame them given the utter superiority of process and attitude in San Antonio. Like Memphis and Dallas, fans are a part of the team, the precise dynamic that a franchise should strive for and the absence of which drove the creation of the Fandom Games to begin with.

The Grizzlies, Mavericks and Spurs were the easiest survivors for the Fandom Games today. The Brooklyn Nets are a touch dodgier, given the brand-driven, big-money approach they’ve adopted since relocating to Brooklyn and the type of fan base that strategy is likely to draw, but as an alternative for fans burned by the vile, big-city Knicks, the fan base in Brooklyn is suitable.

This leaves us with the Indiana Pacers, Los Angeles Lakers and New Orleans Pelicans, one of which will be eliminated today. The Pacers, like the Grizzlies, Mavericks and Spurs, are engaged members of their community, whose fans have merged behind a standard of hard work and dignity. And yet, despite some of the most affordable tickets in the NBA, they regularly lag in home attendance, a hard-to-swallow shortcoming. New Orleans is a different story entirely, focused almost exclusively on football, to the extent that the trade of Chris Paul was an afterthought in the buildup to a Saints playoff game and an LSU championship run. These two fan bases are small yet loyal, creating a difficult …

Deepest apologies readers. Enough of the charade. The Los Angeles Lakers are out, effectively immediately. One of the most expensive fan experiences in the NBA, Lakers games have far too little to do with the game of basketball. Former coach Phil Jackson even acknowledged the ridiculous stargazing dynamic at home games in the understatement of the century: “The focus is sometimes not on the court. It’s on the people in the crowd.” The Staples Center is attached to a nightclub for goodness’ sake.

The scenesters in Los Angeles will keep the Lakers from winning the Fandom Games for the rest of the century.