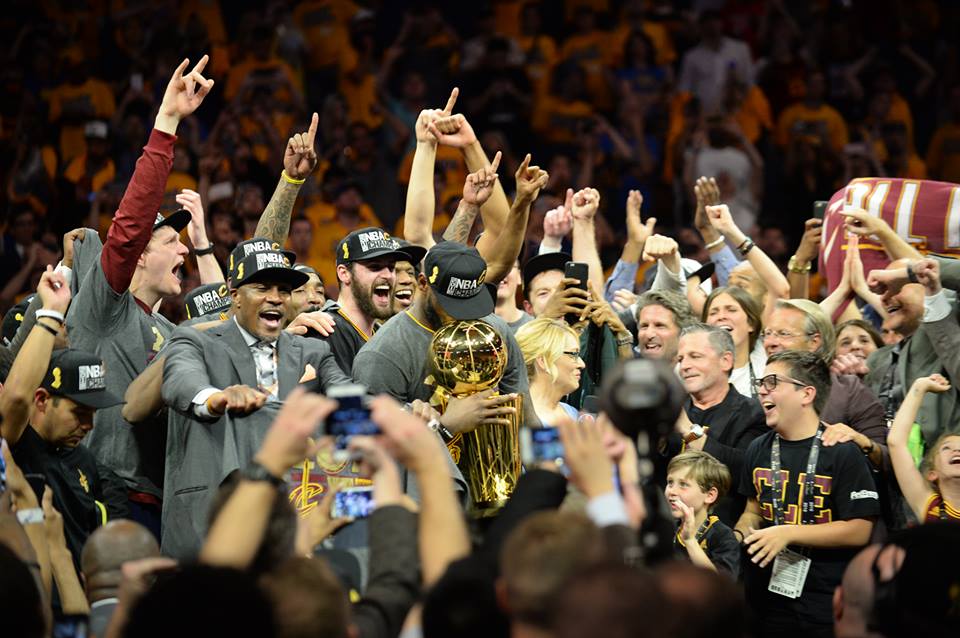 Presenting an NBA preview of the Cleveland Cavaliers that looks at the potential highs and lows for this coming 2016-17 NBA season.

You know what’s even better than that? This video of Kyrie Irving hitting the go-ahead three-pointer in Game 7 of the NBA Finals!

You know what the best thing ever is? This video of the Cavaliers celebrating after they won the 2016 NBA Championship!

My God, I loved this summer so much.

What’s Bad… There’s no guarantee that any of the fun stuff that happened in those videos will happen again this year. 🙁
The X-Factor… I would say that the level of complacency the Cavs will have after winning an NBA Title would be an X-Factor, but in reality that would be an “issue” that doesn’t matter all that much. The Cavs very well could skate through the regular season in order to keep a roster with championship pedigree healthy and rested, and then flip a switch once the third Saturday in April rolls around. Really, the X-Factor is Kevin Love, a man who the Cleveland Cavaliers are paying over $90 million to over the next four years.
Look, Kevin Love’s flaws are public knowledge at this point … until he gave Steph Curry everything he had on one of the final possessions in Game 7 of the Finals, Love hadn’t flashed any defensive promise in ages. He’ll never be a quality defender, and more troubling than this, his role offensively is still in flux, two years after the Cavaliers traded Andrew Wiggins for him. This is inconceivable given the offensive force Love was in Minnesota. The best thing Cleveland could do in the regular season aside from stay healthy and enter the postseason rested is finally making sure Kevin Love has a role within the offense that properly utilizes everything he brings to the table.
Bet On… LeBron James again setting a career low in minutes per game. He’s hit that mark each of the last two seasons, and heading into year fourteen (what the hell!?!?) there’s no reason why his minutes shouldn’t continue to drop. No player in the NBA has more miles on their odometer over the last decade or so than LeBron James. Sure, a fifth regular season MVP would be nice, but doing whatever’s necessary in order to give the Cavs the best chance to repeat as champions is even nicer. Remember all those fun videos?
The Crystal Ball Reveals… The Cavs sleep walk through portions of the regular season, but narrowly edge out Boston for best record in the Eastern Conference (I’m thinking something along the lines of the Cavs winning 57 games and Boston winning 55). For the seventh straight year, LeBron James will play in the NBA Finals, and for the third straight season, he’ll be facing the Golden State Warriors. The loaded Dubs are clearly the title favorite, but Cleveland has a punchers chance since it’s a possibility that on any given night LeBron James and Kyrie Irving can be the two best players on the floor.