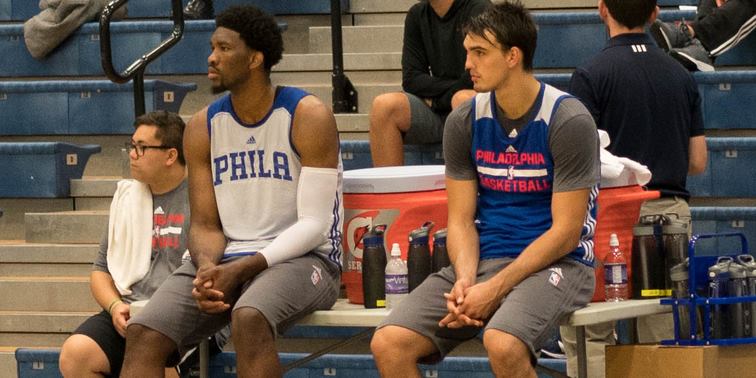 Presenting an NBA preview of the Philadelphia 76ers that looks at the potential highs and lows for this coming 2016-17 NBA season.

What’s Good… There’s finally some semblance of direction and incentive to do well and play meaningful basketball games in Philadelphia, and that’s promising news for parties that are both directly (Sixers players and coaches) and indirectly (basketball fans) involved. There’s no shortage of young talent in Philadelphia’s frontcourt; Head Coach Brett Brown will have Jahlil Okafor (the #3 draft pick in 2015), Joel Embiid (#3 in 2014), Dario Saric (#12 in 2014), Nerlens Noel (#6 pick in 2013) at his disposal, and eventually Ben Simmons (#1 in 2016) at his disposal.

What’s Bad… Well, losing your first overall pick and franchise savior to a broken foot a week before the pre-season starts isn’t the ideal situation (less importantly, it derailed my first draft of this team preview). It’s still a mystery how long Simmons will be out, and that is obviously the biggest problem Philly has this season. Additionally, that youthful frontcourt is a bit of a logjam, and finding minutes for all of those lottery picks will be a chore. Even though the frontcourt is a bright spot, there isn’t quite as much to be excited about in the 76ers backcourt. Jerryd Bayless, T.J. McConnell, Nik Stauskas, Sergio Rodriguez and Gerald Henderson will get the majority of the minutes there, and I can hear you all saying, “Yuck” all the way down here in Estero, Florida.

The X-Factor… It has to be Joel Embiid. We’ve been waiting for over two years for the 7’2″ Cameroonian mystery man to make his NBA debut, and it appears as if the waiting game is coming to a conclusion. For now, Embiid is reasonably healthy and ready to enter the upcoming season as one of many players in Philadelphia’s frontcourt that will need to get minutes. Of them all, Embiid’s upside is (or was, depending on how scared off you are by thirty months of rust) the highest. It would be foolish for any Sixers fan to expect that this young team contends for a Playoff spot this year, but if Embiid can find his footing, stay healthy, and occasionally give fans a glimpse of the promise he showed back in the spring of 2014, this season can be chalked up as a successful one.

Bet On… The 76ers continuing to try to move one of their many capable frontcourt players, and making a related move by the time the trade deadline rolls around in late-February. There are just too many guys who need minutes and Brett Brown won’t be able to accommodate everyone. My best guess is Jahlil Okafor will be the odd man out, so long as Embiid stays healthy and looks like he was worthy of the #3 pick back in the 2014 Draft. Even if Philly has to sell low on Okafor, it might be worth it to be able to get the reps necessary for the pieces that fit best. Even if Philly finds a new home for Okafor (or Nerlens Noel), it will still be a struggle for Brown to find enough playing time for Embiid, Simmons (again, eventually), Saric, Noel and Richaun Holmes.

The Crystal Ball Reveals… I’ll go on record and say that Joel Embiid, despite injury concerns, looks good enough when he does play that he wins the Rookie of the Year award. Additionally, I’ll venture a guess that Dario Saric joins Embiid as a 1st Team All-Rookie selection. And finally, even if the Sixers don’t sniff a Playoff spot this year, they’ll be fun, young, competitive and versatile enough that they enter next season as a trendy sleeper Playoff pick. The Process isn’t looking so bad, is it?