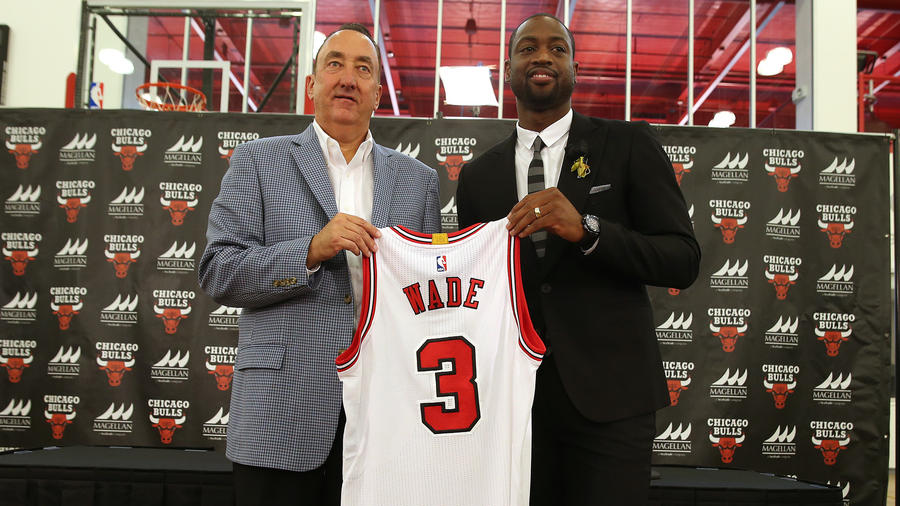 Presenting an NBA preview of the Chicago Bulls that looks at the potential highs and lows for this coming 2016-17 NBA season.

What’s Good… The Chicago Bulls have a bit of a new look for the 2016-2017 NBA season. They’ve shipped off the injury-prone Derrick Rose and Joakim Noah, and picked up some talented veterans in return with Rajon Rondo, Dwyane Wade, and Robin Lopez. Mix those guys in with Jimmy Butler and Taj Gibson, and they could look to have a strong showing in the Eastern Conference.

Although Wade is coming up in age, he proved to be a substantial contributor last season. The 34-year-old NBA veteran racked up 19 points, 4.6 assists, 4.1 rebounds, and 1.1 steals per game last season. He’s publicly stated that the Bulls are Butler’s to lead, and that benefits his play time. It also helps that there’s another bonafide closer on the roster besides Butler. In addition, Robin Lopez is a solid center, and an exceptional choice to replace the injury-riddled Joakim Noah.

What’s Bad… Rondo, Butler, and Wade are all ball-dominant players, so they’ll have to find a way to mesh their games. Fred Hoiberg enters his second season with the Bulls, and if he can get these talented guards to run his favored high-paced offense that is meant to spread the floor with shooting, they might make more noise than expected. However, the problem is that Butler, Rondo, and Wade aren’t the best shooters behind the three-point line. These three alphas do not fit into the more modern NBA system that Hoiberg is known for.

There’s also the possibility that Rondo and Butler might not collaborate well, at least in the beginning, and both may be tangled up in a power struggle. Additionally, Rondo isn’t known to have smooth relationships with coaches.

The X-Factor…  Rajon Rondo has the potential to really mesh well wit this team, as he is a pure point guard that’s ready to make some plays. Rondo led the league last year in assists, dishing out 11.7 dimes per game, while also adding 11.9 points per game. Rondo makes the Bulls pretty dangerous, at least on paper.

Rondo is able to make the passes to shooters coming off of the baseline screens, and can get the ball to the shooting pocket to make life easier for shooters on the team like Nikola Mirotic. His timing is sharp, and he can see the floor very well. D-Rose tended to miss some passing opportunities to find his own shot, but Rondo is more of a pass-first type of point guard.

Bet On… The Bulls will have a slow start because of all the adjustments to the new focal points. Coach Hoiberg’s system didn’t work so well last year, so it seems logical that he might tweak his approach to this particular team. Butler will definitely be the main man on the floor, and Wade and Rondo will take on the supporting roles.

How does this add up? Fans could bet on the Bulls having a better record this season, and making the playoffs, but that’s all for now. This is because things didn’t really fall into place with Hoiberg at the helm last season, especially with his inexperience dealing with divisive personas.

The Crystal Ball Reveals… If things go well, the Chicago Bulls should come out somewhere in the top 5 of the Eastern Conference. They have enough talent to make the playoffs, but what they do in the playoffs rests entirely on chemistry between the new players and how they take on Fred Hoiberg’s offensive-minded system. Not to mention, health is always a factor, especially for Wade.

Rondo and Wade, who have four rings between them, will bring a playoff and championship experience on the floor that this Bull’s team hasn’t had in the past few years. Wade is home, and his clutch-factor and veteran savvy will be a significant factor. Rondo’s determination will also rub off on the other players. None of this means they’ll be NBA Champs, but it’s definitely a step in the right direction.