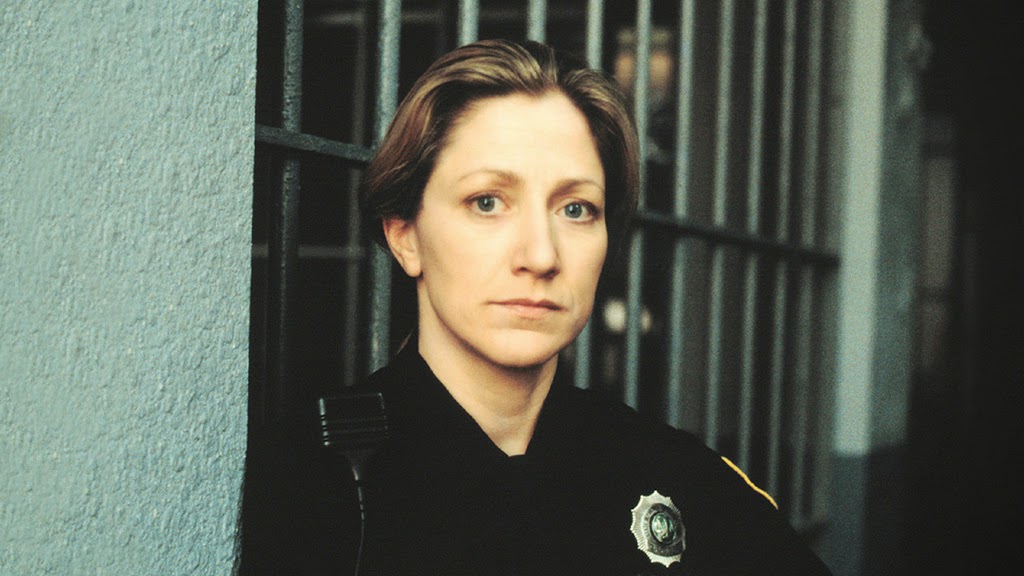 Subjective lists are inherently debatable as personal tastes and individual responses determine how a given character is viewed. In other words, disagreements/omissions will be a reality. The majority of days (weekends included) will feature either one or two articles from this list being published. Exceptions will be if I have an interview or otherwise important project to publish, in which case the Oz series may take a brief break. All prior entries will be linked at the bottom of every fresh article. If you’re a fan of the show and appreciate this project, please promote it widely and spread the word. Pop Culture Spin appreciates your efforts. Up next in the list, we have Diane Whittlesey, played by Edie Falco.

If you were to ask anyone what was the HBO show that Edie Falco starred in, reasonable people would answer The Sopranos. Yes, the wife of Tony Soprano is a substantially more critical role than as a correction officer in Oz, but her work with HBO’s first dramatic hit shouldn’t be swept aside. Whittlesey was one of the show’s top female characters and acted as the first female CO to join the Oz world. She had a difficult life during the show – divorced, single mother, caretaker of her cancer ridden mom, issues with past lovers/substance abuse, and more.

It was never misunderstood – Whittlesey didn’t exactly want to have her job as a prison staff member, but she needed the money and it was a position she was capable of landing. Her most noteworthy character development point was her relationship with possibly the biggest prison staff member of the show, Tim McManus. After having sex and receiving bad vibes from the rest of their coworkers for their rendezvous, Whittlesey dumped the deeply in love McManus. When she left later on in the series, he never recovered.

While I would’ve liked to have seen Whittlesey finish off the series rather than departing during Season 4, I’m grateful for the time she put into the show. In a male dominated world full of testosterone and anger, Whittlesey held her own and became a pivotal part of Oz. It’s also likely that she wouldn’t have became The Sopranos and Nurse Jackie star without her repeated trips from her fictitious TV home to the depraved Oswald State Correctional Facility universe.