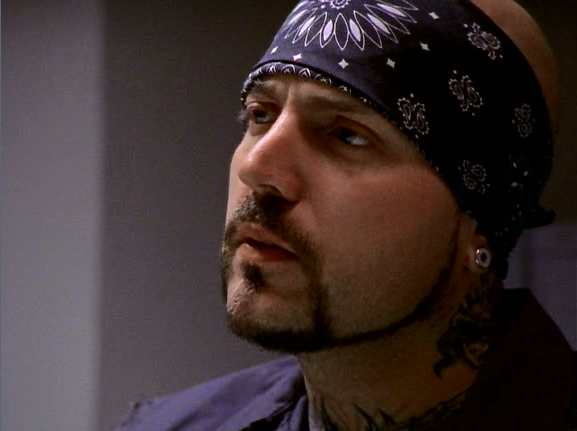 Subjective lists are inherently debatable as personal tastes and individual responses determine how a given character is viewed. In other words, disagreements/omissions will be a reality. The majority of days (weekends included) will feature either one or two articles from this list being published. Exceptions will be if I have an interview or otherwise important project to publish, in which case the Oz series may take a brief break. All prior entries will be linked at the bottom of every fresh article. If you’re a fan of the show and appreciate this project, please promote it widely and spread the word. Pop Culture Spin appreciates your efforts. Up next in the list, we have Jaz Hoyt, played by Evan Seinfeld.

Hoyt did his share of dirt on Oz. By the end of the series, he murdered a number of people and acted as a figure who wasn’t a star, but was a pivotal part of the show. He also had some of the best chin straps ever shown on camera, precise lines of exactness most men either can’t grow or lack the steady hands to shave properly.

The heavily inked Hoyt entered Oz during Season 2. He immediately joined forces with the prison biker gang who had an alliance with the Aryans. Throughout his time behind bars, Hoyt showed a quick temper and severe anger problems. While he had a soft spot such as when he helped Bob Rebadow raise money for his ailing grandson, he also ran scams and opted for violence as a first option.

The bandana, chin traps, and tattoos gave Hoyt a memorable presence. The overall name, Jaz Hoyt, didn’t lack for memorability, either. Oz wouldn’t be a place where Jerry Seinfeld could survive, but Evan Seinfeld managed to hold his own just fine. He did nearly lose his mind toward the end of Season 6, and he had on and off problems with the greatly feared Vernon Schillinger (who will come up later in this list). Hoyt and Schillinger had a complicated relationship, but on individuality alone, it would be a mistake to overlook Hoyt. He was a secondary character who positively aided the show with his role before being shanked to death in a hospital bed.