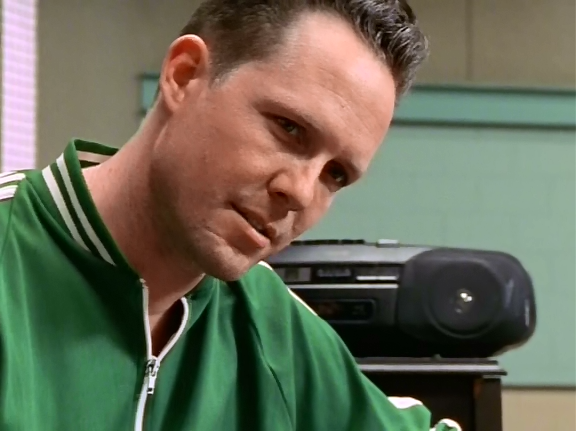 Subjective lists are inherently debatable as personal tastes and individual responses determine how a given character is viewed. In other words, disagreements/omissions will be a reality. The majority of days (weekends included) will feature either one or two articles from this list being published. Exceptions will be if I have an interview or otherwise important project to publish, in which case the Oz series may take a brief break. All prior entries will be linked at the bottom of every fresh article. If you’re a fan of the show and appreciate this project, please promote it widely and spread the word. Pop Culture Spin appreciates your efforts. Up next in the list, we have Ryan O’Reily, played by Dean Winters.

Before becoming the “Mayhem” character in Allstate commercials, Dean Winters was the mover and shaker Ryan O’Reily on Oz. Behind bars, his mayhem was caused in a more subtle and behind the scenes way. He was a slick talker and gifted negotiator – there’s definitely a case to be made that O’Reily was the smartest individual in Oz, prisoners and staff members alike. Surviving is something the show rightfully portrayed as difficult, and it was no mistake that O’Reily’s brain rather than his physicality helped him live through all six seasons.

Perhaps the only person to break through O’Reily’s scheming was Gloria Nathan, the prison nurse who he fell in love with and literally killed for. Beyond her, O’Reily primarily saw others as means to an end rather than friends or comrades. The exception would be his brother, Cyril O’Reily. Cyril will have his time later on with this list. For the Winters character, I would safely say he’s a common fan favorite among loyal watchers and should be in most people’s top three-five.

Where to start with the schemes? O’Reily and Simon Adebisi slowly killed Nino Schibetta by sneaking ground glass into his diet over a long period. He became one of Oz‘s primary drug dealers with a specialty in heroin. To everyone’s face, he would often be respectful and seem like a stand up individual, but behind their backs, he’d call them racial or otherwise offensive slurs and derogatory terms. O’Reily was the type of inmate who shifted his methods and speaking style depending on who was in front of him.

Whenever you see an Allstate commercial featuring Winters as “Mayhem,” it’s okay to laugh, but don’t for a minute act like that captures his best work. HBO has grown into a mammoth force of entertainment quality, and as I’ve stated in each entry of this series, Oz was the network’s first trip into the dramatic TV universe. Thus, Winters shouldn’t be known as a comical commercial character, he should be remembered for being one of the most dynamic individuals given to us by HBO.