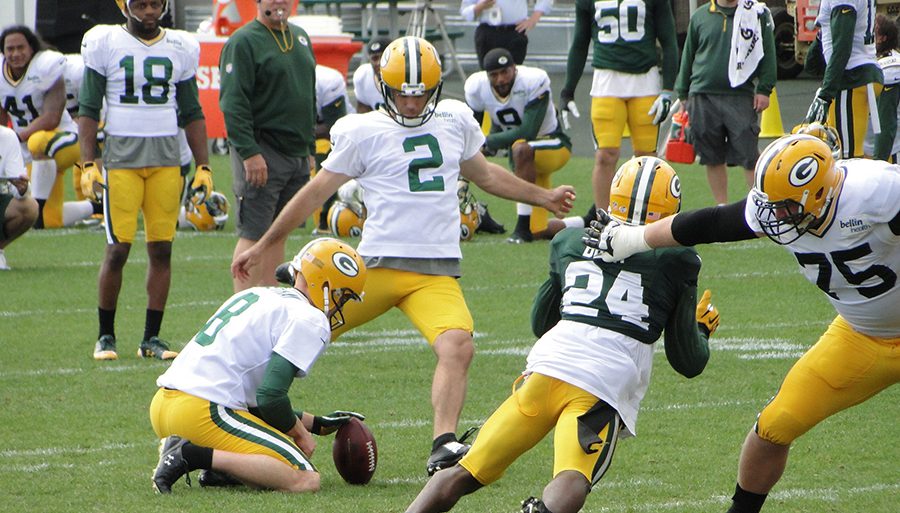 Don’t forget that kickers are people too. While they are usually very late round picks, kickers are an integral part of your fantasy football team. The new rule changes on extra points are things to consider. Also consider if your league counts extra points towards a kicker’s fantasy total. With the new rule change I would imagine most leagues will, but it’s still important to think about.

Dan Bailey, Dallas Cowboys
The Dallas Cowboys will put up a plethora of points this year, but may have some issues in the red zone because of their questionable running attack at this point. Either way, Bailey is a quality choice for your top kicker.

Matt Bryant, Atlanta Falcons
Bryant has three things working in his favor. His indoor home setting allows for pretty consistent kicking year round. The Falcons are also a team that typically puts up points, especially at home. The Falcons new head coach, Dan Quinn, also isn’t a gambling man, so expect the team to take the extra point more often than they go for two.

Dan Carpenter, Buffalo Bills
See the below statement about the New York Jets and insert in “Bills” where you see “Jets.” That’s pretty much it.

Chandler Catanzaro, Arizona Cardinals
Catanzaro will get the benefit of a good defense, solid kicking conditions, and a conservative coach. The real knock against Catanzaro is actually that the offense might be good enough to convert a lot of field position possessions into touchdowns.

Mason Crosby, Green Bay Packers
Despite the insane conditions in Wisconsin, Crosby is a solid selection for your top kicker. It’s mostly due to the Packers putting up so many points every game. You may still want an indoor kicker as your secondary selection when it comes to the later months, however, but I wouldn’t stress it too much.

Nick Folk, New York Jets
The downside to the Jets is kicking in the outdoors in December and January. The upside is the Jets have a great defense that is going to force opponents to turn the ball over a lot, giving the offense good field position. The upside for Folk is that the offense is so anemic that I can’t see there being a ton of touchdowns scored. All that adds up to field goals galore.

Stephen Gostkowski, New England Patriots
Please take this recommendation with a grain of salt. If Tom Brady is out the first four weeks of the season this could be a horrible pick. If Brady’s suspension is overturned, Gostkowski could be the best fantasy kicker in the league. Getting back to the extra points conversation, Bill Belichick might be the type of guy to go for it more often than he kicks, something to keep in mind.

Steven Hauschka, Seattle Seahawks
The Seahawks have an outdoor stadium with a retractable roof to kick in. That balances out with how many points they tend to score, a lot of them on defense. Minus the one bonehead play in the Super Bowl, Pete Carroll is a very sound football coach. I think he’ll take the extra point more often than he tries for two.

Adam Vinatieri
The only knock here is that Vinny is ancient. Pretty sure he remembers playing in leather helmets. The Colts are a lock to put up insane offensive numbers and Vinatieri gets to kick indoors when at home. The coaching staff will not gamble and there may be limited red zone options for Andrew Luck. If you get your choice of kickers then Adam Vinatieri is the safest pick, hands down.

Greg Zuerlein, St. Louis Rams
The guy’s nickname is Legatron, what more do you want? Okay, so he also gets the benefit of a conservative coach and an indoor home dome to kick in. You want more? Zuerlein plays in a division full of stingy defenses. He’ll get some short fields to work with, but there will be a lot of red zone stops that will force the Rams to kick field goals.