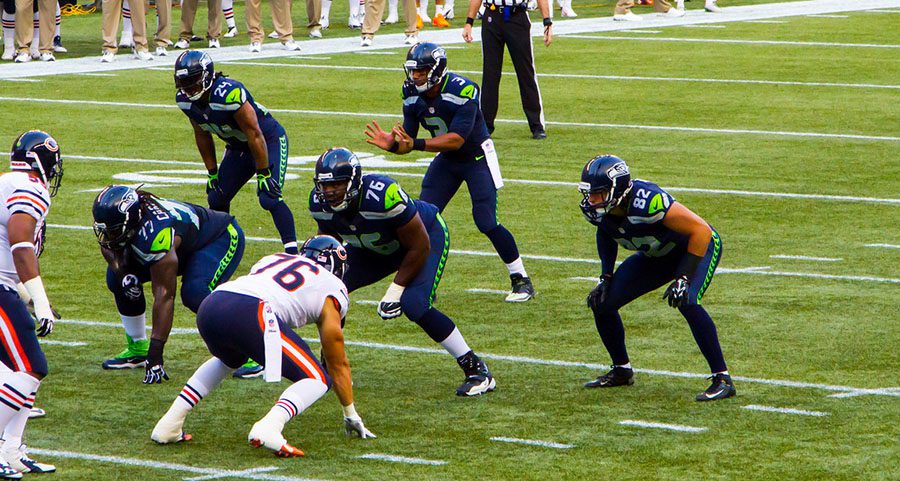 Last season, the NFC West was in a collective upward trend. They were one loss away from all teams having a record of .500 or better. But with coaching and offensive changes, their combined stock seems convoluted. One thing is for sure: the Seattle Seahawks will still be up top. Read more in our NFL season preview of the NFC West.

Most Important Player: Jimmy Graham, TE/WR, Seattle Seahawks
The NFC West’s most important player is surprisingly a newbie in the division. Seattle Seahawks tight end Jimmy Graham was acquired from the New Orleans Saints in the offseason in a case of the rich getting richer. Whereas, quarterback Russell Wilson relied on Marshawn Lynch’s superb running prowess and deep passes last season, he may find himself more comfortable with short intermediate passes to one of the best tight ends currently in the game (but don’t tell Graham that; he might take offense that he’s not labeled a wide receiver). Wilson fed the ball to then-starting tight end Luke Wilson late in crunch time to secure the win in a few games. With the position now undoubtedly upgraded, Seattle’s aspirations are insurmountably high to reach the Super Bowl this season—with good reason.

X-Factor: Colin Kaepernick, QB, San Francisco 49ers
Their stock may be going down as a result of a mass exodus that was underlined by Jim Harbaugh’s departure to Michigan, but the San Francisco 49ers still have some hope in them. At the risk of placing all the pressure on the quarterback, the team will flourish or flounder at the hands of Colin Kaepernick. He still has some great pieces in his offense. Anquan Boldin is still on the roster and the team upped its receiving core by signing Torrey Smith from the Baltimore Ravens. As convoluted as the 49ers backfield looks, they have enough backs where at least one of them can be an effective starting back to balance the pass game. Kaep’ has everything in place to change everyone’s mind about the 49ers this season.

Best Team: Seattle Seahawks
It’s the Seattle Seahawks. They’ve reached the Super Bowl twice already. They could have won both of them were it not for an ill-advised pass, and now they acquired a top tight end. A handful of crucial players from Russell Wilson on offense to Bobby Wagner on defense just got signed to long-term deals, so the team is set to compete now and in the future.

There are too many questions with the other teams. For Arizona, quarterback Carson Palmer is coming off an injury that sidelined him for half of the season. He’s not getting any younger either. Everyone’s got it better than the 49ers now that a big chunk of players that helped the franchise reach the Super Bowl are either playing in other teams or have retired. Despite their solid defense, the Rams have a new quarterback and running back. It may take them some time to mesh.

Team That Could Surprise: St. Louis Rams
Having said that, the St. Louis Rams could surprise many fans throughout the NFC West. But if you have been paying close attention, the pieces have been in place for a few seasons; they have merely been anticipating their strike. The 2015 season might be it: the San Francisco 49ers are in flux and look to be headed towards the bottom of the division. The Arizona Cardinals won too many games late last year and can’t repeat the record that surprised many last season. Oh, and the Seahawks just got paid. Okay, the latter isn’t so much of a detriment as it is an unsubstantiated prediction that many of the Seahawk players will become complacent. Still, potentially going from last in the division to possibly second, or even first, is something every team strives for on Sundays.

Bold Prediction: The St. Louis Rams are going to have the Seattle Seahawks’ number this season
The two regular season matchups may be the best the NFC West has to offer this season. With the Rams’ beefed up defense and the Seahawks’ augmented offensive prowess, something will have to give. The combination of Robert Quinn, James Laurinaitis, and Janoris Jenkins may be too much for the reigning NFC champs.

Offensive Player of the Year: Jimmy Graham
At this point, Jimmy Graham has been mentioned ad nauseam in this preview but for a good reason. The Seahawks were great last season and including an even better tight end in their offensive scheme seems almost unfair. It’s the one-percenters getting even more while the rest of the division struggles to break even.

Defensive Player of the Year: Richard Sherman, CB, Seattle Seahawks
Since the Seahawks have taken up the majority of this preview, why not keep it going? The defensive player will be Richard Sherman. Although his interception rate was cut in half compared to the 2013 season, Sherman managed to get more tackles in the 2014, meaning that quarterbacks weren’t as hesitant to throw near the star cornerback. If this trend continues—ey! Sherman will definitely have more opportunities for interceptions.