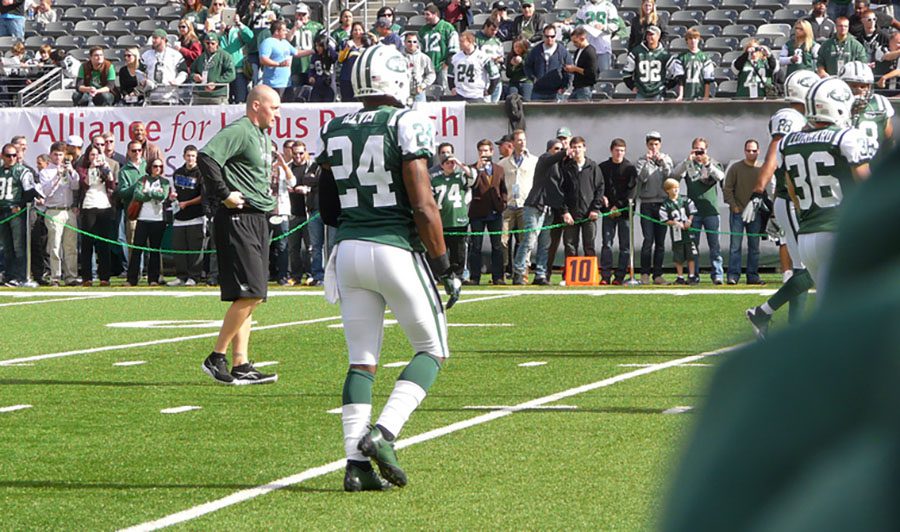 The NFL regular season is quickly approaching and we’re getting amped up to see big player moves come to fruition. The offseason is a time for us to imagine what our teams’ newly-acquired players can do, and for us fantasy football lovers to dream of what we are going to do this upcoming season with our hypothetical, make-believe teams. Of course watching some of our favorite players go elsewhere is always hard to deal with, especially if it’s to a team we loathe. In this NFL season preview, we give our top 10 NFL players on new teams that you may or may not be a little butt hurt about.

Jeremy Maclin to the Kansas City Chiefs
Obviously, the Eagles choosing to sign DeMarco Murray was going to take a toll on the salary cap, and then there was the “what in the hell” switcharoo with the Sam Bradford for Nick Foles trade. We all know that Chiefs QB Alex Smith isn’t fond of throwing the deep ball with a distinct fear of interceptions, but we have a feeling that Maclin will be getting some deep balls his way this season as the Chiefs desperately needed a superstar wideout, and the Jamaal Charles Show could use a stronger supporting cast.

Brandon Marshall to the New York Jets
Brandon Marshall has made a handful of calculated moves in his career, but this one comes as a bit of his surprise as he parts ways with friend and quarterback Jay Cutler. Are there big things awaiting him? Well, with Geno Smith nursing a broken jaw in preseason at the hands of his own (and quickly former) teammate, not to mention the disgrace of a second string quarterback that is Ryan “Pickpatrick” Fitzpatrick, only time will tell.

DeMarco Murray to the Philadelphia Eagles
To say that DeMarco Murray had an incredible season last year with the Dallas Cowboys is a huge understatement. The Offensive Player of the Year made a move that didn’t surprise many, as even Jerry Jones couldn’t have paid to keep this superstar happy. According to Murray, that’s not what it was about. The $40 million baller-ass contract, with $21 million guaranteed, he ran his ass off to get will surely keep him happy despite money not being his main motivation. Alas, something tells me that he may have a bit of trouble going from an enclosed dome to the snowy open stadium winters of Philadelphia. Just saying.

LeSean McCoy to the Buffalo Bills
There was a lot of shuffling going round for the Eagles, and, with the exit of McCoy, it’s certain that Bills fan were rejoicing about their hot ticket pick up. But a serious hamstring injury sustained in the preseason has many people wondering if McCoy will be able to bounce back from this injury. Nevertheless, McCoy was able to etch himself a contract practically identical to that of Murray, now with his former team. It’s a gamble to guess what sort of season McCoy will have due to injury, but clearly he’s the main attraction in Buffalo.

Julius Thomas to the Jacksonville Jaguars
For anyone that owned Julius Thomas in the fantasy league last year, you certainly had no complaints. Aside from minor injuries throughout the season, Thomas was a beast that could not be tamed and one of Peyton Manning‘s go-to options. Will Blake Bortles be looking Thomas’ way come this season? You can guarantee it. That is, once his right hand isn’t broken anymore after sustaining an injury against the Pittsburgh Steelers in preseason. The Jags are hopeful that Thomas will be ready to go for Game 1 on September 13th.

Torrey Smith to the San Francisco 49ers
It may be a while before anyone can think of Torrey Smith not as a Baltimore Raven, but the 49ers were smart to acquire a skilled veteran for their squad. Although their defense may be in shambles, the offense will be looking much better with the additions of WR Torrey Smith and RB Reggie Bush via the Detroit Lions. And perhaps he’ll have a little fun with his old teammate, WR Anquan Boldin.

Ndamukong Suh to the Miami Dolphins
Probably one of the most feared and equally relentless defensive players in the NFL, Suh is a terrifying opponent for many quarterbacks. Miami’s defense is top notch, and the addition of Suh only makes them better. The Lions were sad to see the big man go, but we’re sure Aaron Rogers is glad the days of Suh are behind when facing the Lions. Something tells me that Tom Brady might be Suh’s next favorite target.

Jimmy Graham to the Seattle Seahawks
Although it’s raining Skittles in Seattle, the addition of Jimmy Graham by way of New Orleans is a dream come true to the 12th man. Jimmy Graham and his basketball-like abilities are sure to stun in Seattle. The New Orleans Saints ultimately lost that pizzazz that Drew Brees will be looking for, along with Kenny Stills gone to the Miami Dolphins.

Haloti Ngata to the Detroit Lions
When Suh packed up his bags to head to the Sunshine State, the Lions were eager to swoop in and snatch a big star to fill the deep defensive void in their roster. Althouogh Ngata has been sidelined this preseason with a hamstring injury, being traded by the Ravens in the last year of his contract has left a huge chip on the 31-year-old’s shoulder. Opponents be warned, Ngata has something to prove.

Darelle Revis (back) to the New York Jets
Well, well, well… if anyone else didn’t see this one coming then I’m the idiot missing from the village. Everyone knows that Revis Island is a menancing threat to any wideout looking not to get shutdown, and Revis wanted to get the payday that he somewhat rightfully deserves. But not without getting his Super Bowl ring with the Patriots first.