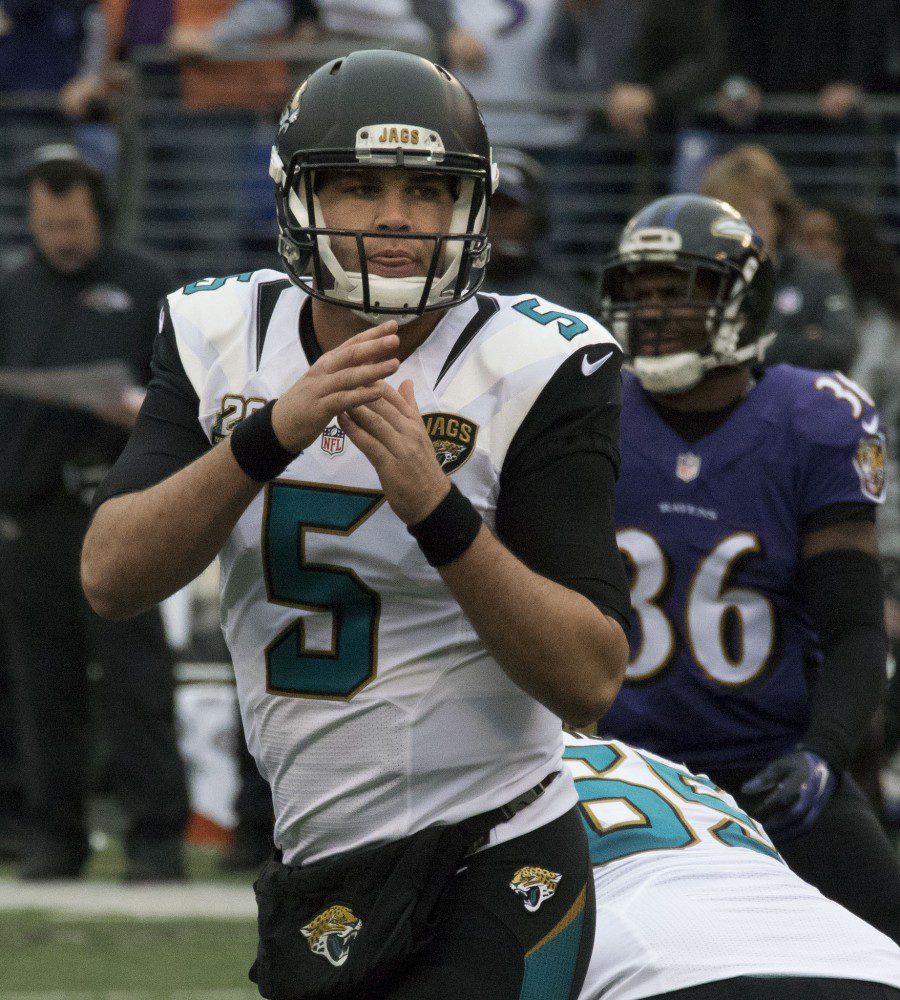 In order to compete with the upper echelon of the fantasy football hierarchy, teams must establish an unprecedented amount of depth within their rosters. There are players that are overlooked every season due to negligence or just straight up ignorance. These players have been written off, regardless of their reputations or previous circumstances. Taking a deeper look at the potential of each situation, we have compiled a list of players that should be ready and there for the taking. These players will make a huge impact on your roster week in, and week out. The next Odell Beckham, Jr. is coming. Will he be on your roster?

Blake Bortles, Jacksonville Jaguars
Fantasy football owners should look for Bortles to make significant strides in his second year as the Jaguars quarterback. With the addition of Julius Thomas and T.J. Yeldon, the Jacksonville Jaguars should have better offensive production through the air this season. Bortles may not be a premiere quarterback option for your QB1 spot, but would make a great addition to your bench for a bye week.

Sam Bradford, Philadelphia Eagles
Bradford has a notorious reputation in the league for his less than stellar health, but his move to Philadelphia should do wonders for his career if he can stay healthy. Bradford should surprise a lot of fantasy owners this year as he ran a very proficient St. Louis Rams offense when he was on the field. He should be able to translate this to an offense in need of a true playmaker.

Derek Carr, Oakland Raiders
Once again, this quarterback may not be a premiere name, but should have a roster spot saved on a fantasy football team. The Oakland Raiders had some of their best offensive games in years last season and this young quarterback is to thank for that. Carr isn’t a highly illustrious pick, but should contribute to any fantasy roster with a minimum of 10+ points a game. He has the talent, and with upgraded weapons heading into his sophomore season, look for Carr to succeed a little bit more in the league this year.

Matthew Stafford, Detroit Lions
This is the year that Stafford will be a completely dependable option to run your fantasy football team. Every season, owners find themselves with disappointing weeks, where Stafford would only contribute a few points. Expect Stafford to continually produce points this year with massive amounts of throwing yards and an exceptional amount of touchdowns.

Devonta Freeman, Atlanta Falcons
Devonta Freenman should make a great addition to your fantasy football roster. As the top running back on the depth chart in camp, owners can anticipate Freeman to make an immediate impact for their offense. Freeman obviously hasn’t necessarily proven himself yet, but he has the ability and the circumstances to make a large impact in the NFL this season.

Frank Gore, Indianapolis Colts
Gore was probably one of the best signings of the NFL offseason. The Indianapolis Colts only had nine rushing touchdowns last season, so look for Gore to get a majority of goal line carries and be a touchdown machine. Also, it’s been four years since he hasn’t rushed for 1,000 yards.

LeSean McCoy, Buffalo Bills
While McCoy had a well below-average beginning to last season, he was able to salvage his value. Now under a dynamic offensive coordinator in Greg Roman, McCoy should be one of the most sought after backs in the league once again. A versatile threat, McCoy’s talent should be taken advantage of and he will dominate fantasy football once again.

Alfred Morris, Washington Redskins
Under the play calling of Mike Shanahan, there was no predictability for the running back position. It seemed that every week there would be a new running back taking over the offense. Alfred Morris had a breakout year in 2013 and has flashed his gift of vision and talent at the highest level. Expect him to excel under new head coach Jay Gruden.

Martavis Bryant, Pittsburgh Steelers
The Steelers offense was the fourth-highest scoring offense in the league last year. With a number one running back and the emergence of Antonio Brown, look for Martavis Bryant to contribute to your roster on a weekly basis. Bryant finished the 2014 season with six touchdowns in his final four games beginning to show consistency at the end of the season and has proven his worth on a roster spot.

Amari Cooper, Oakland Raiders
This offseason, the Raiders have added Michael Crabtree and Cooper to help the already surprising Derek Carr. This is beneficial for Cooper’s fantasy stock as it gives him the ability to stretch the field at the pro level. Cooper should find less defensive pressure focused on himself. Cooper should not only have an immediate impact on the Raiders scoring output, but should also translate to his fantasy football owners’ standings. Equipped with speed and incredible hands, expect Cooper to have a breakout season as our number one rookie sleeper.

Mike Evans, Tampa Bay Buccaneers
This will become the most potent high-end sleeper within this entire list. At 6-5, Mike Evans is on course to become the number one guy in Tampa Bay, Vincent Jackson be damned! Evans scored 12 touchdowns last season and now has Jameis Winston in command of the quarterback position. If Evans gets targeted more, he can be one of the most dangerous receivers in the league. Every fantasy manager should have Evans on their radar and shouldn’t be afraid of pulling the trigger too early on draft day. Evans will be worth it this year as a WR1.

Percy Harvin, Buffalo Bills
Despite changing teams four times within the last three years, Percy Harvin is still a commodity within the league. Harvin’s production may have lessened each season, but under offensive coordinator Greg Roman, look for Harvin to be more involved in 2015. Percy possesses the ability to rush the ball well and should be a multi-level threat in the Bills offense.

Alshon Jeffery, Chicago Bears
Jeffery is poised for a monstrous season, assuming the position of number one wide receiver with rookie Kevin White eventually on the other side once he recovers from offseason injury. Brandon Marshall’s departure may be worrisome to most, but Jeffery outplayed Marshall last season. It’s time that Alshon is a number one receiver and I would use a higher pick to secure the wide out.

Jarvis Landry, Miami Dolphins
Jarvis Landry would be a great waiver wire claim, especially in a PPR league. Last season, Landry had the second most receptions among rookie wide receivers. Look for him to add to that accomplishment, as the Dolphins have lost Mike Wallace and Brian Hartline to free agency. Right now, Landry is listed as Miami’s number 3 receiver after Greg Jennings and Kenny Stills, but should see plenty of action out of the slot.

Martellus Bennett, Chicago Bears
Bennett had one of the most surprising seasons in 2015. Bennett had the most receptions by a tight end in the league and established a strong connection with Jay Cutler that should only flourish. Finishing last season with six touchdowns, and now with Adam Gase as his offensive coordinator, look for another above average year from the seven-year pro.

This season, Josh Hill will be the biggest sleeper that you have never heard of. With the departure of Jimmy Graham, Hill should step into a somewhat tight end-dependent offensive structure. Last season, Hill scored five touchdowns despite only starting three games. Look for Hill to be an automatic contributor within the red zone and put up some monster points. According to his ADP (average draft position), expect more household names like Jason Witten going before Hill, but won’t contribute nearly as much.