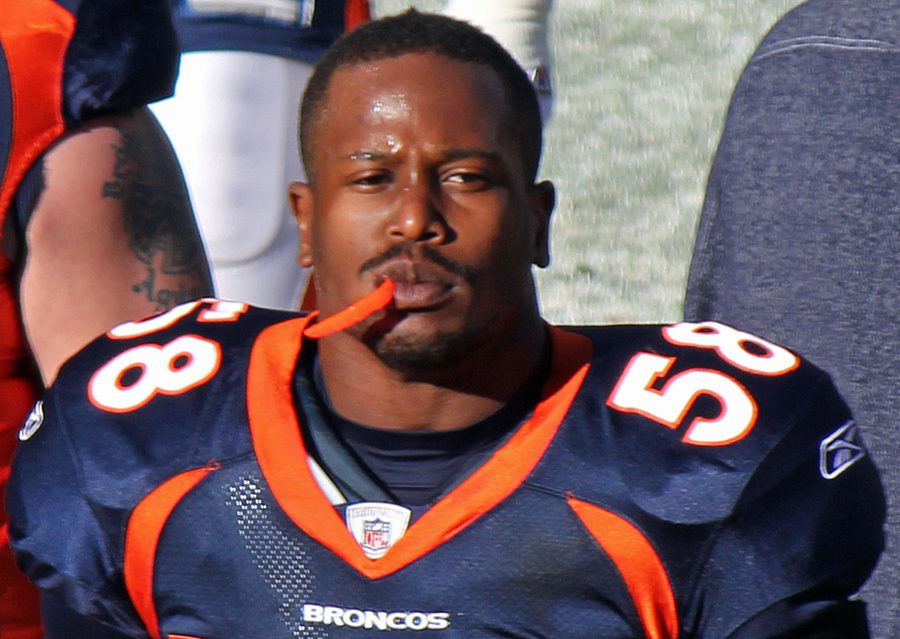 10. Tashaun Gipson, S, Cleveland Browns
This is a name you don’t hear nearly enough of. For a team that is often mired near the bottom of the league, Gipson has shown he is much better than the unit he plays for. Pro Football Focus stated that quarterbacks had a rating of 41.9 when going against Gipson directly, impressive considering his help in the secondary.

9. Marcell Dareus, DT, Buffalo Bills
It is sometimes tough to judge how effective a defensive tackle is based on stats alone. Oftentimes it is the job of a tackle to eat up two offensive linemen, free up a lane for a linebacker, or assist a defensive end applying quarterback pressure. Dareus plays on a team that has tons of quality defenders and still managed to amass 10 sacks, an unreal number for a defensive tackle.

8. Von Miller, LB, Denver Broncos
Miller benefits greatly from the defensive front ahead of him. Yes, he is an elite player that contains power and speed. He also has the benefit of working with DeMarcus Ware, and as far as mentors go, you really can’t ask for anything more. Still, Miller would be elite no matter who he played with. Fourteen sacks from a linebacker is pretty elite territory even if you have amazing teammates around you.

7. Darrelle Revis, CB, New York Jets
Revis is the definition of the type of player who has numbers that do not define how good a player he is. For a corner you’d like to see interceptions, and Revis did have two last season. But in order to get interceptions quarterbacks have to throw at you, and that is where Revis helps his team the most. Revis is now 30 years old and may be moved over to a safety position in the next few years. Until then enjoy watching one of the better corners in the game establish Revis Island as the loneliest place in the NFL.

6. Luke Kuechly, LB, Carolina Panthers
There has been a central part of the dominant Panther defense for a few years now, and that part is Luke Kuechly. Kuechly makes his money by being involved in virtually every play in some way shape or form. Some of his secondary numbers (three sacks, one forced fumble and one interception) won’t blow you away, but 153 tackles is enough to have him among the league leaders year after year.

5. Justin Houston, LB, Kansas City Chiefs
Houston plays on a defensive unit that seems to be in constant flux. Whether it’s coordinators or personnel there doesn’t seem to be a lot of consistency in KC. With all that he still managed to sack the quarterback a league-high 22 times. Not to pile on but he also forced four fumbles in the process. Houston doing this with limited help because of injuries around him is all the more reason to celebrate his ability.

4. Richard Sherman, CB, Seattle Seahawks
Teams were brave last year and decided to attack Richard Sherman head on. In some cases teams did find success with this formula. However, Sherman also found success to the tune of 4 interceptions. It helps that Sherman is part of an elite defensive unit, but he is often asked to cover players individually, often times matching up with the opposing team’s best receiver and sticking to him like glue.

“Isn’t that some sort of STD wide receivers get when they visit Seattle?”

3. Ndamukong Suh, DT, Miami Dolphins
Suh opted to leave Detroit for Miami and become one of the league’s highest paid players in the process. Anyone that would not take that deal raise your hands. Liars! All of you!! He is a force in the middle of the field like Dareus. Suh managed to amass 8.5 sacks last year without the benefit of the supporting cast that Dareus has in Buffalo. Let’s see what he can do in Miami with Cameron Wake.

2. Earl Thomas, S, Seattle Seahawks
The reason I put Thomas ahead of Sherman is because I feel like Thomas does a little bit more. Thomas doesn’t just quarterback a defense, he quarterbacks one of the best defenses in the league and particularly good in the secondary. Despite the good coverage of the corners and the solid run defense of the defensive line, Thomas managed to rack up 97 tackles, 3 forced fumbles, and 1 interception. Those are fantastic numbers for an individual in a unit that is full of great players.

1. J.J. Watt, DE, Houston Texans
Was there ever any doubt? The reigning defensive player of the year, number one on the NFL’s list of top 100 players, and the only person to record 20 or more sacks in back to back seasons. Watt is not surrounded by a stellar supporting cast, teams prepare solely for his presence, and he still dominates. To put this into some perspective, Watt had more sacks that Suh and Dareus combined, as many forced fumbles as Justin Houston, and as many interceptions as Darrelle Revis last season. That isn’t unreal, it’s impossible. This sort of production shouldn’t be possible from a single player short of creating a player in Madden using some kind of cheat code. Yet this is the expectation now of Watt. With Vince Wilfork and Jadeveon Clowny back in the mix this year, maybe Watt can improve on his own insane numbers.