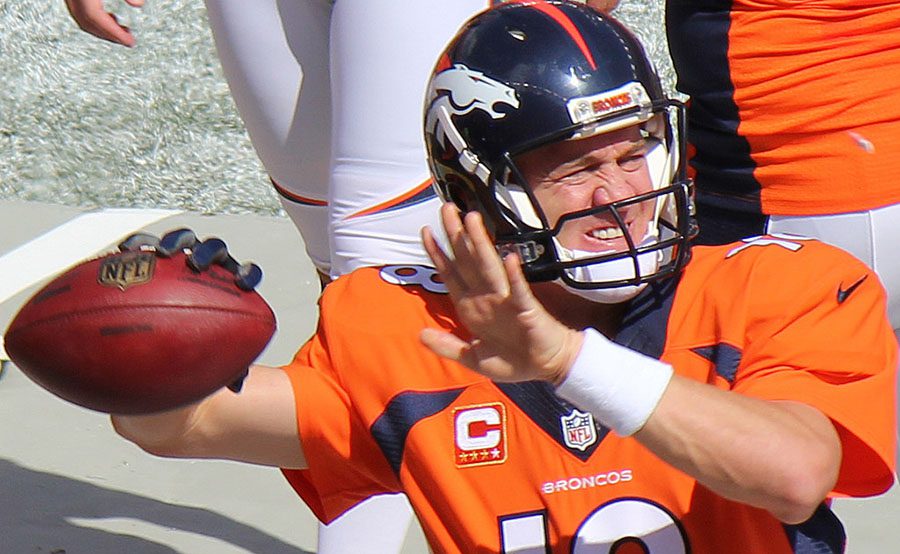 Everybody is talking about how old Peyton Manning is and how he may not be as dominant as he once was. Well when it comes to the AFC West, he still is a force to be reckoned with. Manning is like the Tim Duncan of the NBA without the multiple rings. They both may be getting up there in age, but players still love to play beside them. Read more about the AFC West below as part of our NFL season preview.

Most Important Player: Peyton Manning, QB, Denver Broncos
Well since we are on the topic of Manning, let’s stay there. We all know the greatness of Peyton Manning, but can he last throughout an entire season, including the playoffs, this year? Manning is 38-10 since arriving in Denver, the best record in the league since 2012. However, over the first half of last season, Manning had 24 touchdowns to only five interceptions. The second half of the season, he had 15 touchdowns and 10 interceptions. When the playoffs came, the Colts seemed to wear down Manning showing that Father Time may be catching up. If the Broncos expect to go far in the playoffs, Manning has to be more durable this season.

X-Factor: Melvin Gordon, RB, San Diego Chargers
Although he is a rookie, Gordon was a dynamic back for Wisconsin. In 2014 alone, he had 35 plays in which he ran for over 20 yards. The Chargers did not have a great run game last year, but the addition of Gordon to a good pass team, they could make a late run at a wild card spot for the playoffs.

Best Team: Denver Broncos
As long as Manning is in the pocket, the Broncos will continue to win the AFC West. With weapons such as Demaryius Thomas, Emmanuel Sanders, Owen Daniels, C.J. Anderson and a top 10 overall defense, nobody in this division can compete with the Broncos. Since 2003, Manning has won his division (Colts and Broncos) all except for two years and one of those seasons he had neck surgery which benched him for the entire season.

Team That Could Surprise: Kansas City Chiefs
This year the Chiefs have two receivers in Jeremy Maclin and rookie Chris Conley that give Jamal Charles and Alex Smith some help on offense. This could play a huge part in how far the team goes if they manage to make the playoffs.

The Chiefs were allowed 281 points in 2014, was second best in the league. If their offense can build some chemistry, to go along with a solid defense, they could make the playoffs with no problem.

Bold Prediction: Amari Cooper will earn 1,000 receiving yards and win the Rookie of the Year Award
Cooper is the clear-cut best receiver that was drafted this year. It would help if he was on a better team, but he will still have a good individual season. Derek Carr is actually not a bad QB, but he does need a lot of improvement. Carr and Cooper need to be on the same page for them to have success. The Raiders also added Trent Richardson and Roy Helu in the backfield, better than the offense they had last year. Oakland hasn’t really had a good team since Rich Gannon was QB, but they do have a lot of young talent to build around for the future. They need to just keep getting lottery picks until they hit the jackpot.

Offensive Player of the Year: Peyton Manning, QB, Denver Broncos
Manning just has too many weapons at his disposal to not have a good season. The only thing that can stop him this season is his health. Other than that, the Broncos offense is locked and loaded. Look for Jamal Charles as a close runner-up, depending on the success of the Chiefs season.

Defensive Player of the Year: Von Miller, LB, Denver Broncos
Miller has 49 sacks and 12 forced fumbles in his four-year career so far, despite tearing his ACL two years ago. Miller will show his dominance once again this upcoming season. Miller had a great start to his career, including 18.5 sacks in his second season. Miller will definitely get back to double-digit sacks this season.