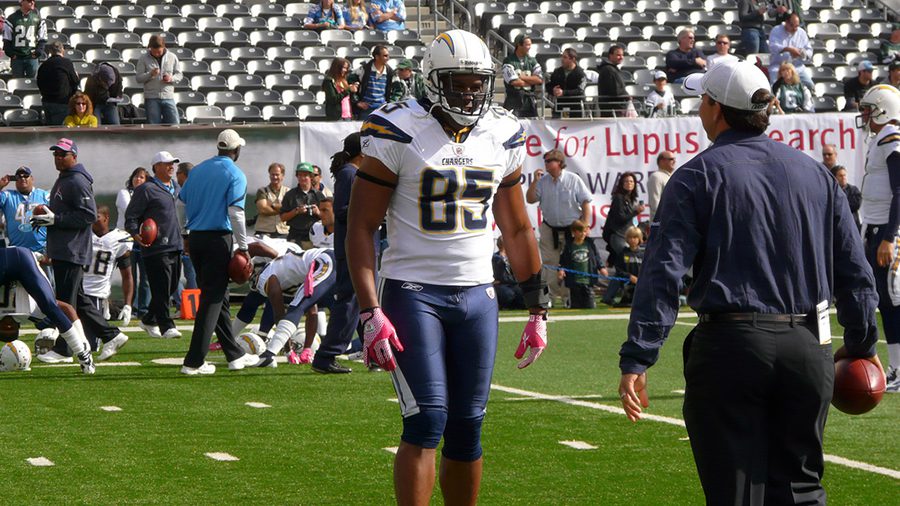 This isn’t a top 10 overall list of tight ends to grab in your fantasy football draft, but rather a collection of players to consider as sleepers, as well as some known performers that have some questions due to things like injury or suspension.

Owen Daniels, Denver Broncos
Owen Daniels is back once again for the very third time with Gary Kubiak, newly signed coach that’s relied on a playbook involving heavy usage of the tight end position. While Kubiak will surely make modifications to the offense, Kubiak will likely allow previously ran, successful schemes to be repeated; because you’re not going to totally abandon an offense that makes one of the greatest in the game feel comfortable. And being that former Broncos tight end, Julius Thomas, had such a major role in the offense, there is no reason we won’t see Owen Daniels getting a legitimate amount of targets, especially with the defense being spread out by both Emmanuel Sanders and the freshly paid Demaryius Thomas. Forecast looks good for fantasy owners in that you can swoop on Daniels very late in the draft as a TE2, but it must be stated that Daniels has had some issues in the past with injury and will be going into his tenth season in the NFL. However, the role that Daniels is stepping into led by a coach that he’s played significantly with before, grabbing Daniels in the 10th round or later seems like a pretty solid move for fantasy owners looking to use the majority of the draft to load up on other commodities.

Vernon Davis, San Francisco 49ers
Vernon Davis is going to have to be better this year. It’s not just that San Francisco’s entire roster has been depleted and dismembered with dramatics and farewells, but Vernon is in the last year of his contract and is in no position to ask for anything glitzy when it comes to extending his football career. Davis has shown massive potential and capability in previous seasons, yet recorded only two touchdowns in 2014. Despite some minor injuries, he played only one game less last season than he did in 2013, a year where he shined brightly with 13 touchdowns on 52 of 84 targets, averaging 16.3 yards per reception, so we know there’s a high-producing tight end waiting to emerge for his squad in 2015. Vernon will be available until the bitter end in most drafts, so if you’re looking to pick up a tight end late, one that has every reason to make a big impact this year, not only for his team and his quarterback, but also for himself, think about Vernon Davis. May be some serious bang for your low-valued buck.

Larry Donnell, New York Giants
There’s been nothing but positive reviews coming out of New York Giants training camp in regards to tight end Larry Donnell. This is another player at the position who’ll be available very late in most drafts, and one that has the potential to have a consistent offensive performance this year. If the health of Victor Cruz and Odell Beckham, Jr. remain intact, Donnell’s opportunities will be maximized ten-fold. Also, look for the rather large 6’6”, 265-pound tight end to be used heavily in plays, particularly in the red zone, which is the most favorable usage of the position when it comes to fantasy football production. He’s got the goods when it comes to playing up high, securing receptions, and hanging on to the football. He and Eli Manning show much promise in that department. He may be listed behind Fells in the depth chart for now, but that’s mainly a precaution made by the Giants until they are absolutely positive he’s 100 percent. And again, his size and role make for big time activity in the red zone, the kind that gets you money in fantasy.

Tyler Eifert, Cincinnati Bengals
Eifert has been destroying the pigskin at Bengals training camp this offseason and shows promise to be one of the main offensive weapons for the team this year. When he was selected 21st overall in 2013, he was revered as one of the most skilled and valuable tight ends to enter the draft in recent memory. The Notre Dame graduate has faced a disappointing NFL career thus far however, particularly due to a 2014 season riddled with injury, playing in only one regular season game with virtually no stat line to reference. Now, with Jermaine Gresham gone, the meaty tight end (6’6” 250 pounds) is ready to take this season into his own hands, showing already that he can be a go-to target for Andy Dalton, presenting the team’s quarterback with another option over A.J. Green. Eifert is another player at this position that can be taken very late, generally in the last round if not on the waiver wire after the draft. So essentially again, you have a very low cost in selecting him and a potentially very high reward for a super late TE2 Tyler Eifert selection.

Coby Fleener, Indianapolis Colts
While Fleener’s had issues when it comes to securing the ball, his elite speed and size make him valuable, especially because he’ll be available at the very end of your draft. He’s atop the Colts depth chart as their number one tight end over Dwayne Allen, who faced injury quite a bit last season. When Fleener catches the ball, he averages 12.9 yards after the catch, and that’s for his career. Last season he averaged an impressive 15.2 yards after the catch and while there were drops and other careless mistakes, Fleener has the capability of making a large impact on the Colts offense in 2015. Look for Fleener to be utilized as a receiving option because of his size and speed. In being able to create mismatches while playing on the last year of his contract, I expect Fleener to have a significant role in the Colts’ offense with a noteworthy amount of opportunity. The Colts have one of the best distributing the ball in Andrew Luck and are known for running two tight end formations, why not take someone like Fleener at the end of your draft? An easy TE2 selection and potential sleeper this season.

Antonio Gates, San Diego Chargers
Now we all know that Antonio Gates is one of the most successful NFL tight ends of the last decade. Boasting 99 touchdowns in his impressive career, 12 last season alone along with 44 first down receptions, Gates is the go-to guy for Philip Rivers and the Chargers offense. And why shouldn’t he be? He’s tested and proven and shows up each and every year. Sure he’s suspended for the first four games of the season, but you can grab Antonio as your TE1 option later, more towards the 8th round. Because he’ll be available much later in the draft than he usually is, taking Gates despite the suspension could prove to be very fruitful. If you can handle the four-game suspension by drafting accordingly, Antonio Gates is definitely a supreme tight end to target as a number one option relatively late with a nice sleeper TE a few rounds later.

Josh Hill, New Orleans Saints
Replacing Jimmy Graham seems to be quite a daunting task, but the reality is, someone will have to do it. Sean Payton and the Saints coaching staff aren’t going to change their entire playbook after suffering the loss of their star tight end, especially when they have Josh Hill, a talent at 6’5”, 250 pounds who’s not only up to the task of replacing a former integral part of their offense, but is awaiting the opportunity. This is another guy with the promise of huge offensive production available late in the draft. If you can grab Hill for your bench late you’re getting a quality deal.

Travis Kelce, Kansas City Chiefs
Travis Kelce is a TE1 option worth taking in the middle rounds. Despite injury, he had an 81% reception rate last season to lead all tight ends in the league. He also led all tight ends last year in yards after the catch average (12.9), which is a good thing because Alex Smith doesn’t generally like to throw the ball deep. Also important to consider is the addition of Jeremy Maclin, a remarkable receiver who had a total of nine downfield receptions of 20 yards or more last season. Maclin will surely see his fair share of targets, but his presence on the field will also create opportunities for players like Kelce, who has shown unbelievable potential in the past two years. Even when targeted second most to Anthony Fasono last season, he still managed to achieve twice the production of his fellow tight end. Worth an earlier pick in the sixth or seventh round as a TE1 option.

Maxx Williams, Baltimore Ravens
Williams, a rookie out of Minnesota, may be a prime TE2 option that will be readily available at the latter end of your fantasy football draft. The Ravens are looking to replace the production of Owen Daniels and the number one candidate for this job, Dennis Pitta, is now looking to miss at least the first six games of the regular season. Williams has impressed this offseason with his athleticism and ability to keep the drive alive. While he has competition by way of Crockette Gilmore, there is just no way that Gilmore can compete with the explosiveness and power of Maxx Williams. In their preseason opener, Williams gained 22 yards on a 4th and 20 situation to put the Ravens in position to win the game. He was able to jump over the New Orleans Saints defense and create massive gains out of virtually nothing. It was his effort that allowed the one-yard, winning score that followed the 22-yard gain and best believe John Harbaugh and company took notice. Coming from a lineage of football players, Williams may prove to be one of the most productive rookies this season with the opportunity to put up big numbers, especially with Steve Smith, Sr. being the only threat for deep plays. TE2 option taken in the last round seems like a sleeper steal to me.

Tim Wright, Tampa Bay Buccaneers
Coming from a New England Patriots offense that’s notorious for running two tight end sets, Wright knows how to play his position well. Although targeted only 33 times last season, he was able to complete 26 of those targets, attaining six touchdowns and 259 yards, averaging 10 yards per reception. Look for rookie QB James Winston to seek him out. Available for you up until the very end as a potential key TE2 selection, Wright can end up being an absolute steal.