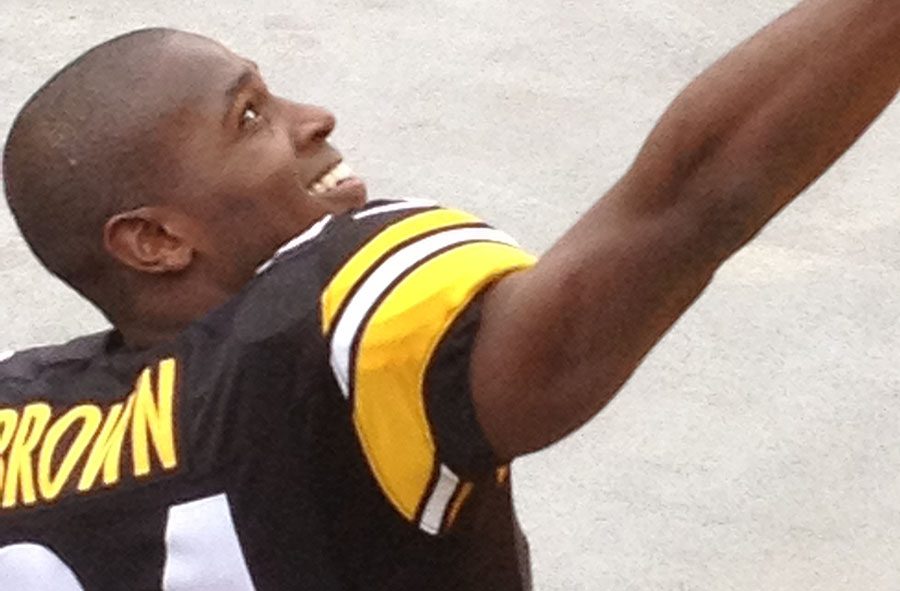 Image courtesy of The Football Juice/Flickr.

It is quite often debated about who the best players in the NFL are. When that list is filtered down to offensive players only, making the right call becomes a little bit tougher. There are many factors to take in when looking at what players dominate the offensive side of the ball above all others. Current production, past success, and future expectations are all crucial in determining who truly belongs in the class of the elite. Keeping all of this in mind, here is a look at the top ten offensive players heading into the 2015 season as part of BMF Sports’ NFL season preview.

10. Le’Veon Bell, RB, Pittsburgh Steelers
Le’Veon really burst onto the scene last year in his second NFL season. With 1,361 yards rushing and 8 rushing touchdowns to go along with 83 receptions, 854 yards, and 3 receiving touchdowns, that will certainly bring attention to you. Going into last year it was known that Bell wanted to lose weight in order to be quicker and it certainly worked out for him. Going into 2015, Bell will begin the season serving a 2 game suspension. However, once he returns, expect Bell to put up similar if not better numbers than last year.

9. Dez Bryant, WR, Dallas Cowboys
Dez has established himself among best receivers in the game since coming into the league in 2010. Bryant had a career year last season by posting 88 catches and 1,320 yards to go along with 16 touchdowns which led all NFL wideouts. Dez has been known for his antics off the field; however, if he keeps his head on straight, Dez will have no problem staying among the elite.

8. Rob Gronkowski, TE, New England Patriots
There is no debate right now about who the best tight end in the NFL is. Although Gronk is a wild animal off the field, he is even a bigger animal on the field. Last year he accounted for 82 receptions, 1,124 yards, and 12 touchdowns. Gronk has been force ever since he has entered the league scoring 54 touchdowns since 2010. As long as he can stay healthy, which has been a problem for him at times, Gronk will continue to be the premiere tight end in the NFL for years to come.

7. Antonio Brown, WR, Pittsburgh Steelers
There is certainly an argument for who is the most talented wideout in the NFL, but there is no debate as to who has been the most productive. Over the past two seasons, Brown has registered 239 receptions, 3,197 yards, and 21 touchdowns. In fact, he even threw for a passing touchdown and returned a punt for a touchdown as well. Brown really can do it all for the Steelers. Expect Brown to continue his big time production.

6. Marshawn Lynch, RB, Seattle Seahawks
Beast Mode is a one of a kind player in the NFL. Many know him for his funny press conferences, but his play on the field is what sets him apart from other running backs. Last year, Lynch totaled 1,306 yards, 13 touchdowns to go along with 4 receiving touchdowns. Seattle continues to run a rush-first offense so Lynch figures to still put up big time numbers with Russell Wilson at QB. Lynch arguably runs harder than any other back in the league. Expect skittles to fly from the crowd into the end zone even more this year coming up.

5. Peyton Manning, QB, Denver Broncos
Peyton’s numbers took a little bit of a dip last year after his record setting performance in 2013. The Denver Broncos lost Julius Thomas during the offseason although that shouldn’t stop Peyton from putting up big time numbers once again. At the age of 39, Peyton is approaching the finish line of his career, but he is still one of the most feared QB’s in the league. Last year Manning threw for 4,727 yards and 39 touchdowns. And numbers like that were considered a down year for him considering he also threw 15 interceptions, the highest amount since he’s been in Denver. Manning still has a good group of weapons led by Demaryius Thomas and Emmanuel Sanders. Manning will have no problem putting up big time numbers again going into his 18th season.

4. Adrian Peterson, RB, Minnesota Vikings
Many may question Peterson being this high on the list given the fact that he only played in one game last season, but Peterson’s reputation speaks for itself. Going into 2015, Peterson is hungry to get back out onto the field. Even at the age of 30, it is hard to pick a better back than Peterson. With franchise QB Teddy Bridgewater in the fold, Peterson will no longer have to deal with eight men in the box during every rush. And if you remember, Peterson rushed for over 2,000 yards after the last instance of missing significant time on the field.

3. Andrew Luck, QB, Indianapolis Colts
Ever since Luck arrived in Indianapolis in 2012, he has only been getting better and better. On the field, Luck displays tremendous arm strength and accuracy and has been compared to the likes of Peyton Manning and John Elway. Luck exploded for 4,761 yards and an NFL leading 40 touchdowns to go along with 273 yards and 3 touchdowns on the ground in 2014. There is no better young QB in the game right now and Luck seems destined to put up better numbers going forward with a stacked set of weapons led by T.Y. Hilton and newly acquired Andre Johnson. Don’t be surprised to see Luck leads the league in touchdowns again for the next decade to come.

2. Tom Brady, QB, New England Patriots
The sports world thought Brady was finished after a disastrous game in Kansas City last year. How did he respond? He went on to be Super Bowl MVP in a triumphant Super Bowl 49 victory over the Seattle Seahawks. Brady continues to take the Patriots to the promised land year after year registering four Super Bowl rings during his time in the league. At the age of 38, Brady is approaching the end of his career yet no one can count him out. With Gronk at tight end, and Bill Belichick as head coach, Brady will continue to put up elite numbers and add even more wins to his resume. Brady will likely begin the season by serving a suspension. Everyone around the NFL knows that once Brady steps back onto the field, his hunger for another Super Bowl ring will be higher than ever before.

1. Aaron Rodgers, QB, Green Bay Packers
Right now, Rodgers is the best offensive player in the NFL. Last year, Rodgers threw for 4,381 yards, 38 touchdowns, and only threw 5 interceptions to cap off the second MVP season in his career. At the age of 31, Rodgers has all the talent in the world to get even better. Rodgers boasts a career passer rating of 106.0. No one else in NFL history has touched 98.0. Heading into 2015, Rodgers will be without top target Jordy Nelson due to an ACL injury in the preseason. Even with a loss as devastating as that, Rodgers will still show why he is the best of the best. Rodgers has already accomplished so much in his career already and he looks primed to be elite for the rest of his career. It will be interesting to see if someone can take the #1 ranking from Rodgers by the 2015 season’s end.