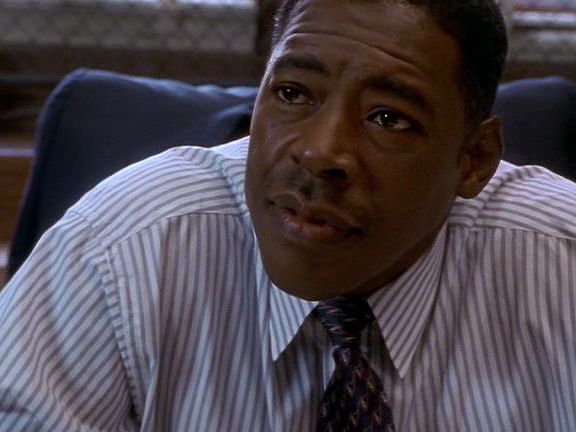 Subjective lists are inherently debatable as personal tastes and individual responses determine how a given character is viewed. In other words, disagreements/omissions will be a reality. The majority of days (weekends included) will feature either one or two articles from this list being published. Exceptions will be if I have an interview or otherwise important project to publish, in which case the Oz series may take a brief break. All prior entries will be linked at the bottom of every fresh article. If you’re a fan of the show and appreciate this project, please promote it widely and spread the word. Pop Culture Spin appreciates your efforts. Up next in the list, we have Warden Leo Glynn, played by Ernie Hudson.

Hudson is kind of that borderline B-actor who tends to over-act in a way that takes away from his entertainment characters. This is something I’ve yet to discuss in this entire series – especially given the time frame in which it aired – some of Oz‘s dramatic scenes weren’t always delivered with the most believability. That’s merely a minor criticism of an otherwise legendary show, and that can also be applied to Leo. Even with his over-acting accounted for, he was a critical figure to the show because, of course, he ran the freaking prison.

If there was ever any doubt in your mind that the Oz creative team enjoyed killing off primary characters, that should’ve been erased when the warden, yes, the warden, was murdered in the final season. Various deaths had occurred at this point, but killing the boss of the entire prison was certainly bold. I wasn’t particularly upset at Leo’s death, was never the biggest fan of his character, but I was definitely surprised.

What Leo also provided was something of a necessity for Oz – the operational and professional background of running a prison. Nothing about Leo’s job was easy. There were often budget cuts/financial restriction, unhappy employees, violent outbursts among inmates, and more. That madness often caused Leo to make tough decisions. In the end, his place of employment was also the reason for his death.

While killing Leo was perhaps a bit over the top or unrealistic, it was meant to show that no one in a prison environment is safe, and no one is above the warped sense of justice those inside may hold. Rest in peace, Leo. If there’s a prison in the afterlife, maybe you’re running it.