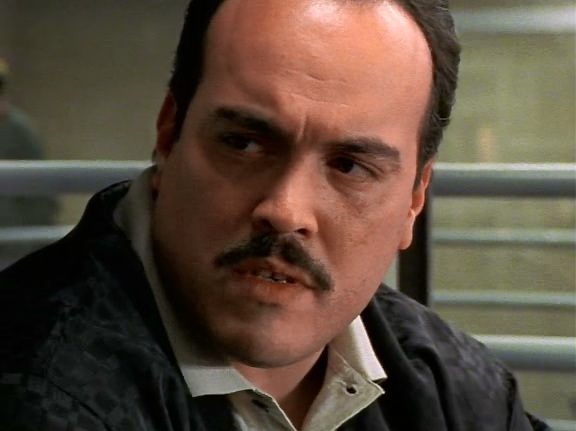 Subjective lists are inherently debatable as personal tastes and individual responses determine how a given character is viewed. In other words, disagreements/omissions will be a reality. The majority of days (weekends included) will feature either one or two articles from this list being published. Exceptions will be if I have an interview or otherwise important project to publish, in which case the Oz series may take a brief break. All prior entries will be linked at the bottom of every fresh article. If you’re a fan of the show and appreciate this project, please promote it widely and spread the word. Pop Culture Spin appreciates your efforts. Up next in the list, we have Enrique Morales, played by David Zayas.

Morales didn’t make his debut appearance in Oz until Season 4, making him a rare late performer to land on this list. Zayas is a strong actor who played Morales with enough conviction that his smaller screen time compared to other Oz figures didn’t take away from his overall power. He was among the most powerful Latino inmates the show had, and his respect was immediately enforced the second he came aboard.

Inmate Morales could be incredibly cold blooded when the situation called for it. He had a comrade purposefully injure prison guard and NBA hopeful Dave Brass. He wanted elderly inmate Bob Rebadow to murder someone else in spite of Rebadow’s overall harmlessness. The list could go on. Beyond the blood on his hands, Morales had a major impact in the drug world of Oz. What Morales showed was how much respect and fear reared their heads in a prison environment. He had the reputation of someone not to cross, and this influenced how others reacted to him.

The ordering of having Brass injured eventually resulted in the downfall of Morales. Brass and other staff members put Morales in solitary confinement and sliced up his lower body. The damage inflicted upon him made Morales cross paths with lunatic Nurse Grace who overly sedated him before suffocating him to death. For such a feared prisoner, Morales was brought to a pathetic and hopeless death where control, something he so desperately sought during his stint on the show, was totally out of his hands. Sometimes karma catches up with an individual – it certainly did with Morales.