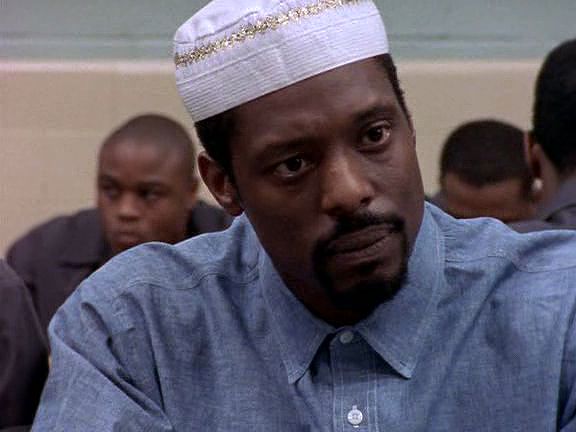 Subjective lists are inherently debatable as personal tastes and individual responses determine how a given character is viewed. In other words, disagreements/omissions will be a reality. The majority of days (weekends included) will feature either one or two articles from this list being published. Exceptions will be if I have an interview or otherwise important project to publish, in which case the Oz series may take a brief break. All prior entries will be linked at the bottom of every fresh article. If you’re a fan of the show and appreciate this project, please promote it widely and spread the word. Pop Culture Spin appreciates your efforts. Up next in the list, we have Kareem Said, played by Eamonn Walker.

“I refuse your pardon!”

Quite simply, the above line is one of the best moments in HBO history. When the previous entry of this list, Governor James Devlin, offered Kareem Said a pardon from his crimes for his quality work behind bars and influence from others to have him be freed, Said rejected in dramatic fashion. This was a moment that summarized the Said figure quite well – one of intensity, conviction, and commitment. I literally applauded and screamed in my house when Said uttered this line. I then proceeded to watch the scene multiple times in sheer happiness.

There was much more to Said than one witty line, though. He was possibly the best character Oz presented because of his thoughtfulness and depth. Said was widely respected and always had a significant influence over the inmate population. Beyond that, Said had pull in the media and his voice was appreciated by most staff members.

I’ve voiced earlier in this list that Simon Adebisi and Said are my favorite Oz characters, and my Adebisi piece specifically mentioned their epic fight scene that resulted in Adebisi’s death. When Said was forced into confrontations, he would react with violence. But he preferred using his knowledge and words to settle disagreements. This wasn’t always possible in the violent and unsettled living quarters he found himself in. Sadly, violence, as we likely should’ve predicted given how many major Oz characters were murdered, was the method in which Said was removed from the world.

This came after Augustus Hill passed. Said was designated to publish Hill’s journal, and when meeting with a man claiming to be a reporter, Said was shot twice in the chest. There’s no way to describe this scene as anything other than heartbreaking. It was an accomplishment for characters to reach the Oz finish line – Said was sadly not one of them. But for his central importance to the show and firm argument as the show’s best character (or in the top three-five at a minimum), Said has to be remembered.